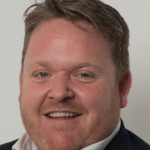 Building and project consultancy Paragon has opened an office in Edinburgh which will be led by David Philip (left), previously building consultancy partner at Knight Frank.

Mr Philip has joined as a director and head of office alongside Jamie March, who worked with him as an associate at Knight Frank over the past three and a half years. Mr March joins the business as an associate building surveyor.

John Munday, Paragon joint managing director, said: “We believe there is a great deal of opportunity for Paragon in Scotland.”

Founded as an independent consultancy in London in 2009 with ten directors and four employees, Paragon achieved revenues of £1.7m in its first year.

In 2015, the consultancy opened a second office in Manchester to service its northern clients. The consultancy now employs more than 100 people and its revenues were £12.2m for the year ended 31 March 2017.

Linkedin
David Philip, Paragon Appointments No Comments » Print this News
Partnership for location tracking companies Previous News
Next News Join the debate on how to get Brexit-ready