Guardian revamps in bid to break even 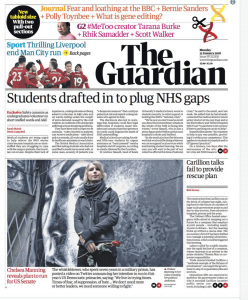 The Guardian has unveiled its new look format as its owner struggles with turning a profit against declining print sales.

The tabloid design (pictured) replaces the Berliner format and was described by editor-in-chief Katharine Viner as the culmination of an “exhilarating period of creativity, imagination and focus.”

Ms Viner added that it is hoped the money-saving move can ensure the future of the media organisation.

She said: “Our move to tabloid format is a big step towards making The Guardian financially sustainable.”

A video previewing the launch was voiced by actress Maxine Peake who described the newspaper as providing a “space for big ideas”.

The media group said its website and sister paper The Observer will also undergo a redesign.

The changes, announced last summer, will result in the closure of Guardian Media Group’s (GMG) printing sites in Trafford, Manchester, and Stratford in east London. The company invested £80m in these sites in 2005 when it opted for the Berliner format and they will now be sold.

Printing will instead be outsourced to tabloid presses run by Trinity Mirror, owner of the Record, Mirror, Sunday Mirror and People and will be printed in Scotland for the first time.

The Guardian made an operating loss of £62.5m last year and is on track to lose £25m this year and break even the following year.

The newspaper has lost 300 staff, including 100 editorial members, in voluntary redundancies over the last couple of years.

The Guardian initially looked at going tabloid in 2005 when The Times and Independent changed down to the smaller format but opted for Berliner, a stretched tabloid which is common on the continent and had been the size chosen by Business AM, the former Scottish financial newspaper which operated from 1999 to 2002.
Critics say the move to Berliner format was a mistake for The Guardian as it has been unable to offer more contract printing of other titles which would have offset running costs.
Share The News