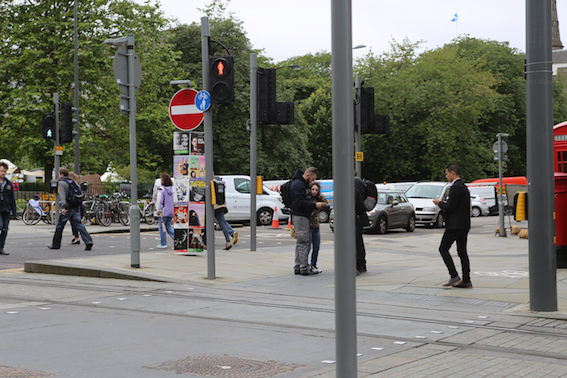 Councillors in Edinburgh are being urged to reject plans to install a number of eight-foot billboard drums on the streets in a bid to tackle flyposting.

Conservationists and residents are appalled at the prospect of the towering drums in sensitive areas such as St Andrew Square, one of the city’s prize Georgian Squares, and even Castle Terrace in the shadow of the castle rock.

Planners have recommended refusal for three out of seven of the planned 2.4 metre (7.9ft) cylinders. Other proposed sites are Grassmarket, Festival Square, Morrison Street, Shandwick Place and Dalry Road at the junction with Haymarket.

He said: “We recognise the desire to help visitors and residents alike get information about what’s happening in the city but that it’s in the context of ever-increasing concerns about clutter.”

Adam Wilkinson, director of Edinburgh World Heritage Trust, was also cautious but he said the drums had the potential to be “recognisable elements” in the city-scape like old police boxes.

He said: “We strongly encourage the reduction of street clutter, but we also recognise the need for facilities like this to prevent flyposting.

“The proper management of these columns will be vital – they can quickly become unattractive and untidy if it’s a free-for-all and anyone can just stick up a poster.”

There has already been concern over the increasing clutter of signage around the city, much of which is deemed to be of marginal benefit. St Andrew Square is now a forest of poles and signs, including almost 70 between Princes Street and Queen Street on a side of the square little used by traffic.

London-based City Centre Posters won the contract to install the poster drums to help combat flyposting which costs the council £300,000 a year in clean-up costs.

One resident, Susan Fabbro, of Dundonald Street, said: “Edinburgh is already littered with advertising boards on pavements and roads to the point of information overload.”

Alison Bruce, of Great King Street, said it would create “unnecessary visual and street clutter in a beautiful Georgian Square and public space” and Andrew Haddow, of East London Street, said the drum will have “an unacceptable detrimental impact due to the proximity to a number of a listed buildings”.