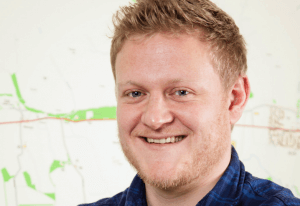 Technology company thinkWhere has appointed David Frankland to the position of operations manager.

The promotion of Mr Frankland (pictured), who has been with the Stirling-based mapping-data company since 2012, comes as thinkWhere is looking to increase its UK market share and expand its global operations.

Alan Moore, CEO, said “An important aspect of our recently announced re-organisation and international expansion is the creation of a world class management team.

“David’s promotion to the role of operations manager is critical to this team and to the continued development and delivery of solutions around the world for clients such as the British Library, Scottish Government, Balfour Beatty and Humanitarian OpenStreetMap Team.”

A first class graduate in Geography and Geology, Frankland also holds a Master’s Degree in Geographical Information Systems (GIS) from the University of Edinburgh.

He joined thinkWhere as GIS Developer having previously worked as a research assistant for the Scottish Carbon Capture and Storage Group and as a GIS Analyst for Edinburgh based Mapix Technologies.