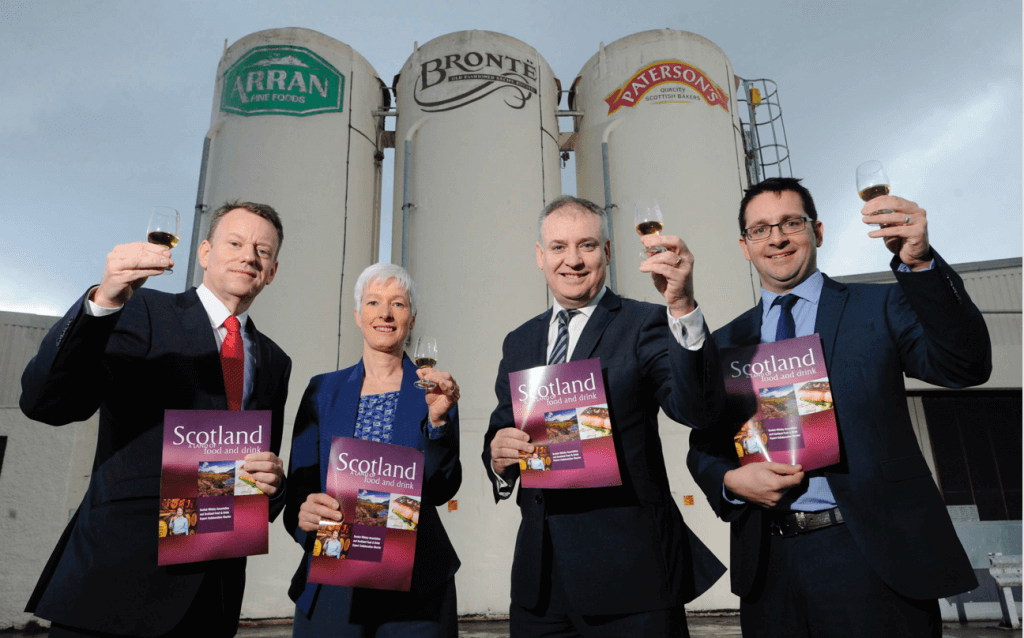 Food and drink was a big contributor to higher exports

Scottish sales of goods and services outside the UK rose by £460 million to £29.8 billion, driven substantially by food and drink.

Sales to the rest of the UK totalled £45.8bn, showing it to be significantly the biggest market for Scotland.

“We want to see other sectors replicate this export growth by creating products and services to sell globally. It’s clear that more Scottish businesses are embracing international opportunities and we want to encourage them to do even more.

“Which is why we’re doubling our SDI staff numbers in Europe and establishing hubs in countries with the most opportunities for Scottish companies.

“We know our approach is working, as recent independent evaluation found that for every £1 we invest in overseas trade activity, we generate £4.”

Scottish Conservatives economy spokesman Dean Lockhart said: “These figures confirm that far and away our most important market is the rest of the UK.

“Scotland’s priority must therefore be to deepen our trading partnership within the UK single market to ensure we all benefit.

“The SNP is so obsessed with Brexit it is in danger of ignoring the opportunities for growth offered by our own internal marketplace.

“And with exports to the rest of the world on the rise, the SNP would do well to realise the decision to leave the EU offers as many opportunities as it does challenges.”

Scottish Liberal Democrats said new export statistics were testament to the value of Scotland’s place in the UK and EU and that putting up new barriers to our place in either market would cause “real economic harm”.

Liberal Democrat Scottish affairs spokesperson Christine Jardine MP said: “These export statistics show that it is imperative that Scotland retains its place in both the UK and the EU.

“Putting up new barriers to our place in either of these critical markets would cause real economic harm. These statistics are a reminder that no other deal can come close to the benefits of being part of these.”

Sterling rose risen by 0.72% on the dollar to $1.41on better than expected UK employment figures.

Scottish unemployment fell slightly between September and November. However, the employment rate also decreased slightly over the same period.

Scotland’s employment rate has fallen by 0.2 percentage points across the September – November 2017 period.  Workers in Scotland have also seen an increase in average hours worked, by 0.4 hours (1.2%) over the last year.

“With more than 300,000 Scots now self-employed, policymakers must shift their approach to back those who work for themselves. In our view, that means ensuring that our social security and childcare systems work for those that have set up on their own.”

Liz Cameron, Chief Executive, Scottish Chambers of Commerce, said: “It remains encouraging that the UK’s labour market is showing considerable signs of strength, with more full time workers in post than ever before.

“However, as was reinforced by our most recent quarterly economic survey, many industries are continuing to post vacancy levels at record highs.  This continues to suggest that skills shortages are holding back growth across the Scottish and UK economy.”

Wage growth also came through, up 2.4%, easing pressure on households.

Ian Stewart, chief economist at Deloitte, said: “The worst of the squeeze on incomes is probably behind us.”

The improving jobs outlook could persuade the Bank of England to raise interest rates.

“If this pattern of solid jobs growth and a gradual pick-up in earnings growth were to persist through the year, then this could push the [Bank of England monetary policy committee] towards a further interest rate rise later in 2018.”

The number of full time employees now stands at a record high of 20.25 million, with the overall employment rate remaining at 75.3%.   However, the number of vacancies has risen to 810,000, the highest figure recorded since comparable records began 2001.

Howard Archer, chief economic adviser to the EY ITEM Club said the rise in jobs was the biggest increase since July. But he was more cautious about wage growth.

“On the pay front, November’s data offered little impression that the ‘Phillips Curve’ is reappearing. Total pay rose by 2.5% in the three months to November, unchanged from the previous three-month period. Growth in regular pay ran at 2.4%, up from 2.3%. With inflation still elevated, the average worker took another hit to purchasing power, with real pay 0.5% down on the year.

“However, the buoyancy of the jobs numbers does perhaps point to an economy not quite as soft as some suggest. Q4’s GDP data, released this Friday, will reveal all.”