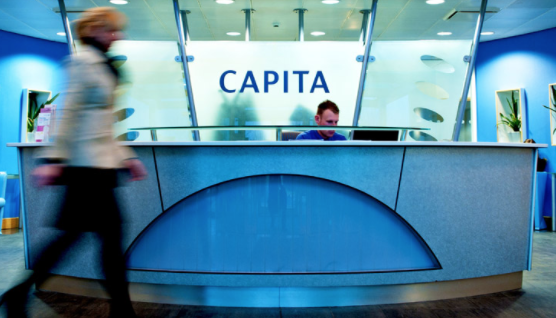 Shares in Capita plunged 47% after the company issued a profits warning, adding to the outsourcing sector’s woes.

Capita, which handles a vast range of activities from the BBC licence fee to helping retailers manage online shopping sites, helped drag down the FTSE 100.

Capita also suspended its dividend and announced a £700 million rights issue, thus diluting the value of its shares.

It will be selling assets to enable it to boost investment, focus on contract profitability, and plug a hole in its pensions scheme.

Babcock and Serco fell in sympathy, as the sector suffered continued bad news. However, analysts were quick to distance Capita’s problems from the crisis at Carillion which last week went into liquidation after the banks pulled the plug on a company with huge debt and pension liabilities.

New chief executive Jonathan Lewis has recognised that the company needs to restructure after concluding that it has become too big.

“Capita needs to change its approach. We cannot continue to focus on the incredibly broad array of disparate businesses. The strategic review we’re undertaking will cause Capita to shrink, cause Capita to focus.”

Hargreaves Lansdown senior analyst Laith Khalaf, said: “A bit like Carillion, Capita’s problems have been pretty long-running … the company is in a state of turmoil and the new CEO has come in and set out a plan to get it into a state of recovery.”

Housebuilders fell after reports that the government was again ruffling feathers over so-called landbanking. Reports suggest it will rescind planning permission on unused land even though the industry says it is overstating the case. Cala boss Alan Brown last week said his company develops all sites it owns.

The report saw shares in Persimmon, Berkeley Group and Taylor Wimpey all down more than 2%.

Declines among cyclical sectors such as energy, materials and financials also weighed. These sectors, which are more sensitive to the economic cycle, made a strong start to the year as investors bet on a global boom lifting equities, but have since succumbed to profit-taking.