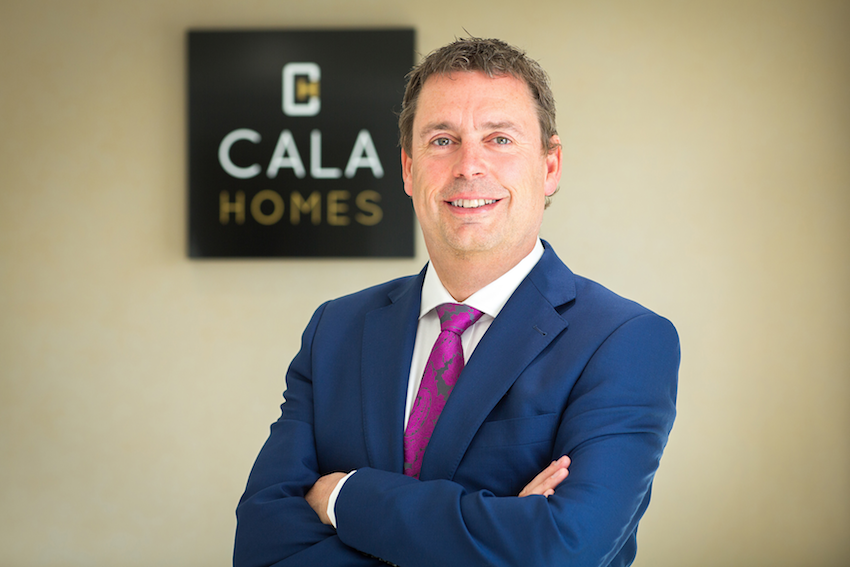 House builder Cala has raised its target of new homes to 3,000 per year as it stays on course for a sixth year of record profits and revenue.

The company reported a strong six-month period of trading, delivering a 34% increase in total home completions and has become Britain’s fastest-growing house builder by volume.

Chief executive Alan Brown said “exceptional progress” has been made in transforming the business and scaling up its eight divisions.

He again took issue with the UK government over ‘landbanking’ at a time when the country is suffering a shortage of homes. He said ministers continue to believe house builders are sitting on undeveloped sites which is not the case.

“There is not a single site that we have which we are not in the process of developing,” he told Daily Business.

He added that the issue had been around for a number of years along with general hold ups in planning which prevents Cala building even more homes. It has a current target of 2,500 per year.

In his statement with the update, he said: “2017 was another excellent year for Cala and the first six months of the current financial year have seen us maintain the strong momentum generated by the business in recent years that has seen us become the UK’s fastest growing housebuilder by volume over the last decade.

“We have made exceptional progress in transforming the size and scope of our business and remain focused on scaling up our eight divisions as we continue to make significant progress towards achieving operational efficiency.

“The policy environment for the housebuilding sector improved further in 2017 and we were particularly encouraged by the £44bn committed at the November Budget to boost the supply of new housing, alongside the ongoing focus on the development of urban areas.

“The UK continues to face an urgent shortage of housing but it is abundantly clear that there is cross-party political support for a full range of initiatives to boost both construction and home ownership.

“However, while we have been increasingly encouraged by the direction of travel among policy makers, there remains far too much focus on land banking with the latest review announced in November’s Budget the fifth of its kind since 2004.

“Instead of conducting yet another review of this nature, the Government would be better advised to review the approach to planning adopted by local authorities that continues to cause excessive planning delays.

“We are well placed to deliver what would be our sixth consecutive year of record revenues and profits and, as a result of our performance in recent years, the consistent delivery against our growth targets and the investments in the business we have made, longer term, we now believe that we have the capability to deliver over 3,000 units per annum from our current operating structure.”