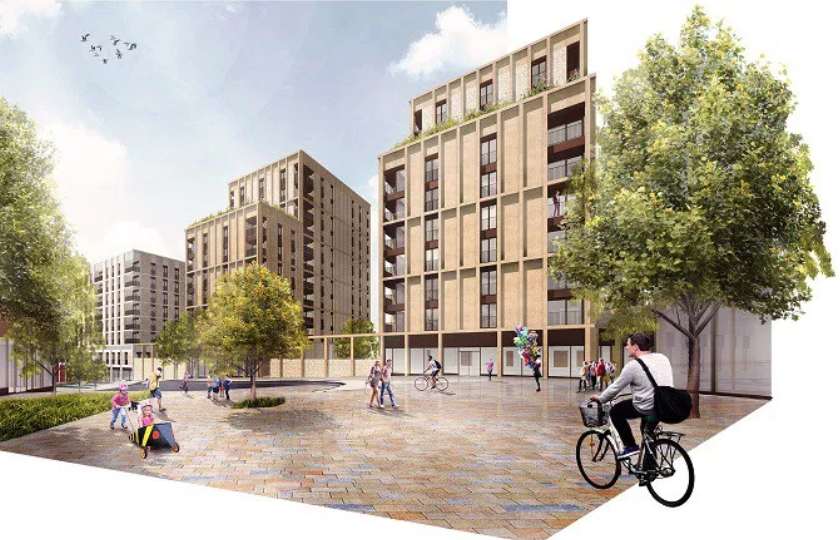 A £200 million to transform a former railway goods yard into a new community of 727 homes for rent has been submitted to Glasgow City Council.

The plan for the 7.5 acre site behind High Street rail station includes a public square, as well as 99 student studios and 3,365sqm of retail, leisure, food, drink and commercial business space.

For the first time, the area will be opened up through new tree-lined access routes, connecting the Merchant City through High Street and into the East End.

The area was the original location of the University of Glasgow and the Hunterian Museum.

It later became the goods yard of the City of Glasgow Union Railway Company. The Molendinar Burn, the original freshwater source upon which Glasgow was founded, also passes underneath the site.

However, other than a small section currently used as a car park, the site has lain empty and derelict for many years.

The new vision is the brainchild of Get Living, a large scale residential investor and owner-operator of the former London 2012 Athletes’ Village, now known as East Village. The investment in Glasgow is the company’s first venture outside London.

Following public consultations with the local community, the outline planning consent granted to the previous site owner has been reconfigured to create a residential-led and green neighbourhood, including new public amenities and access routes.

Glasgow-based architecture practice Stallan-Brand, which has worked on development projects in the city including the 2014 Commonwealth Games Athletes’ Village and Tron Theatre, drew up the plans alongside urban landscape designers Martha Schwartz Partners to create public areas throughout the site.

An established operator in the UK’s build-to-rent sector, Get Living believes such neighbourhoods can help alleviate housing shortages in city centres, with properties typically brought to the market and occupied more quickly than for-sale developments.

Rick de Blaby, executive deputy chairman at Get Living, said: “The housing shortage in the UK needs no introduction and we know from our own research that there is a demand for high quality and professionally-managed rental homes in safe, well-maintained neighbourhoods.

“We have listened carefully to local people, then worked very hard to create these ambitious plans for a new green neighbourhood in the heart of the city. This is a historic site and we are keen to see it become a thriving part of Glasgow’s future.”

Get Living CEO, Neil Young, added: “We believe this new neighbourhood at High Street will be an ideal fit for this part of the city and bring what is currently an invisible site back to life.”

Subject to planning consent being granted, work on site would start in late 2018.