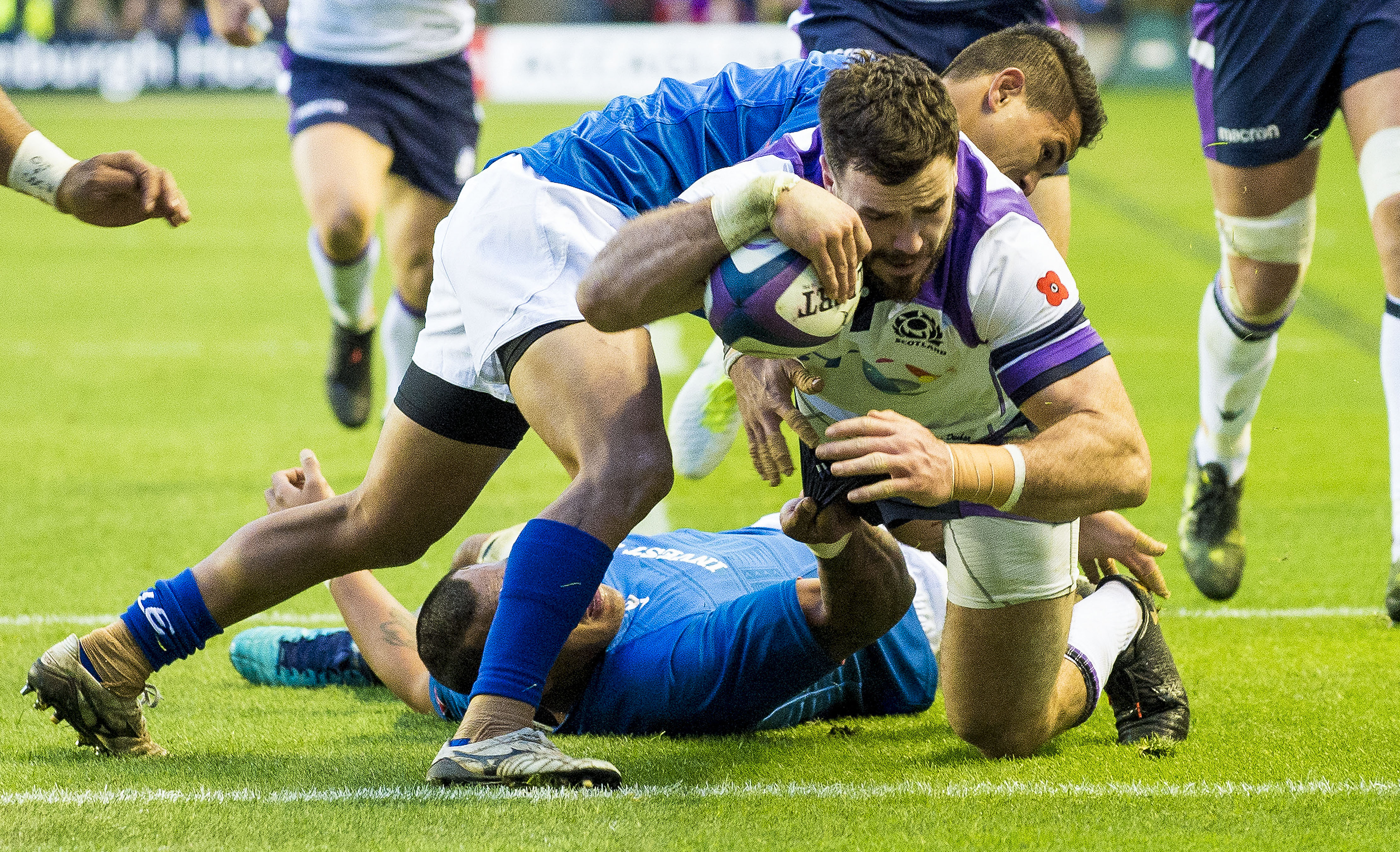 Alex Dunbar goes over for Scotland’s fifth try in the 44-38 win over Samoa at BT Murrayfield (pic: SNS Group)

Scotland head coach Gregor Townsend achieved the result he wanted in his first game in charge at BT Murrayfield with victory over Samoa but the win will have posed more questions than answers.

The home side showed some great invention at times to run in six tries in front of a sell-out crowd for the first of three Autumn Tests. To concede five tries against their second-tier opposition, however, will be a concern for Townsend with the All Blacks in town next weekend.

Stuart Hogg got the scoring underway with less than two minutes on the clock, when he enjoyed the bounce of the ball after latching on to a through kick from Tommy Seymour.

Further scores from Huw Jones and Stuart McInally saw the hosts go in at the interval with a comfortable, if a little flattering 25-10 advantage.

Moments after the restart McInally went over again, Hogg’s conversion giving the Scots a seemingly unassailable 22-point lead against the Pacific Islanders, who had endured a wretched build-up to the match with the Samoan Rugby Union having been declared bankrupt.

The tourists showed commendable resolve, though, to run in four tries after the break and come within touching distance of an epic victory.

They had hardly touched the ball before Samoa notched another try, though, Nanai-Williams nipping through a slack defence and converting to reduce the lead to just eight points.

The end-to-end action continued with Alex Dunbar touching down for the home side but in what had become a familiar trait, no sooner had the Scots scored than they conceded again at the other end through Kieron Fonotia.

Scotland responded through a Peter Horne score yet lessons still hadn’t been learned and the Samoans clawed their way back into the fixture with Treviranus going over under the posts.

The conversion made it a six-point game and thankfully the Scots were able to see out the final moments to make it three wins out of four on Townsend’s watch.

The head coach had to contend with a string of call-offs ahead of the match due to injury, and Willem Nel joined the casualty list with a suspected broken arm which is set to rule the prop out of the upcoming Tests against New Zealand and Australia.