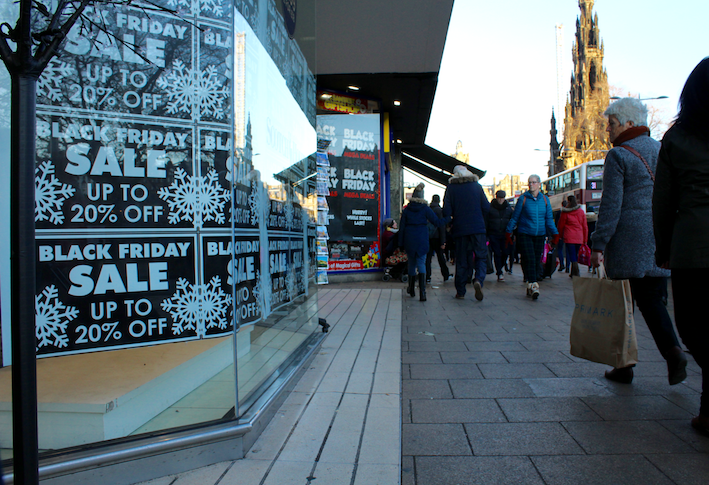 Evidence from shopping monitors suggests there has been a 2% drop in online sales this Black Friday compared to last year.

By 2pm today the peak minute for purchasing in the UK was 10.58am.

Overall, Crewe is home to the savviest shoppers, with the highest number of online transactions between the hours of midnight and 1pm, followed by South East London and East London.

Chris Boaz, ‎head of marketing at PCA Predict said: “Sales for Black Friday are down 2% year on year, as of 1pm today. This is primarily because of prolonged sales periods in the run up to Black Friday, as more and more retailers start their sales earlier and continue discounts for longer in the run up to the festive season.”

Online sales between midnight and 7am fell by almost a quarter (24%) compared to 2016.

Mr Boaz said: “We’re unlikely to ever see the likes of 2014 again in the UK, where consumers turned out in the hundreds in store on Black Friday.

“Instead, retailers will compete primarily online for consumers’ hard earned money and we can again expect to see consumers break the current record of eight million online purchases, while footfall continues to decrease.

“Whereas Cyber Monday used to be an event in its own right, it is now merely an extension of Black Friday weekend, and many retailers are now extending this sales period beyond the four days to drive sales in the run up to the holiday season.

“Last year we saw an 8% increase in smartphone traffic volumes on Black Friday, with 49% of overall traffic coming from mobile devices. This year might be the year when mobile actually replaces desktop in terms of purchases.”

High streets can expect footfall to rise by 20% compared to a normal Friday, according to ShopperTrak.

Black Friday blues for shops that lose out