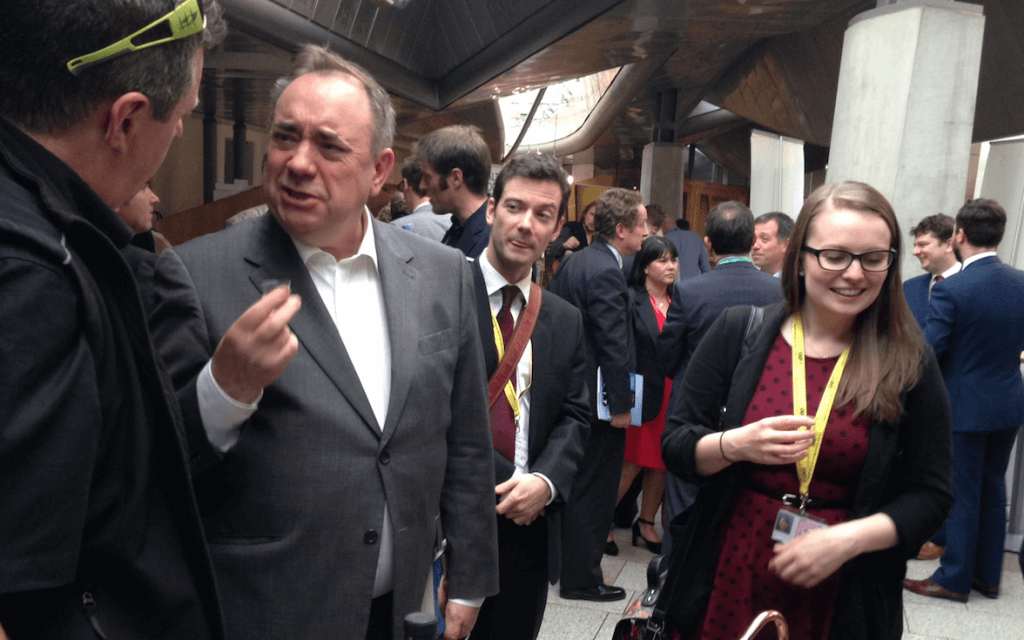 Alex Salmond has confirmed his part in a plot to unseat the management of Johnston Press, owner of The Scotsman newspaper.

The former First Minister has admitted to being part of coup attempt by a Norwegian publisher and shareholder in Johnston Press, as speculated by Daily Business last month.

Mr Salmond has described The Scotsman as “irrelevant” and  wants to see its headquarters relocate north from its base in London.

He is collaborating with Christen Ager-Hanssen, who owns 20% of Johnston Press, the publisher of 200 newspapers including the Falkirk Herald, Yorkshire Post and the London-based ‘i’.

The latest moves by the pair have emerged as Johnston Press today issued a trading update stating that it “continues to make good progress with its strategic initiatives”.

Mr Ager-Hanssen’s stake makes him the biggest investor in the heavily-indebted group, and The Telegraph says he will call this week for Mr Salmond to replace Camilla Rhodes at the helm.

Chief executive Ashley Highfield is also in the sights of the Norwegian who accuses him of starving the papers of investment.

The former MP, who lost his Westminster seat at the General Election in June, said in an interview: “Unfortunately and for the first time in its 200-year history The Scotsman has become largely irrelevant.

“There are questions to answer obviously and it is up to shareholders to decide who has the right answers.”

Johnston Press continues to be hampered by a £220m debt burden which increased when it bought the ‘i’ newspaper last year, adding to its onerous interest payments.

With revenue from advertising and newspaper sales under pressure the company is facing another refinancing challenge.

The former MP said: “In terms of journalism, which is my area of interest, the standards are depressing across the group. That is not the fault of the people who are there it is because of all the people who have left.”

Although The Scotsman opposed Scottish independence in 2014 Mr Salmond is thought unlikely to insist on it switching its allegiance should the acquisition succeed.

“The journalists will be free to do what they should be doing, which is to write the news and the facts. Editors will decide the editorial policies. As chairman, if we are successful, that’s not my job,” he told The Telegraph.

“But we’ll see if we can try and restore the paper to the respect in which it was held. That respect of having decent journalism and informed journalism is far more important than the editorial lines.”

Mr Salmond said: “The Scotsman can be anything it likes. It can be left-wing, right-wing, liberal. It can be Seventh-day Adventist as long as it is pro-Scottish. The problem for the last 20 years is that it has not been pro-Scottish.

It is understood Mr Ager-Hanssen is no longer seeking to join the board but would install Steve Auckland, the former Metro and Local World chief.

The consortium’s plans, however, have been frustrated by a little-used clause inserted into a refinancing deal with Johnston Press’s banks.

The mechanism, known as a “dead hand proxy put” was included in the company’s bondholder agreements when it last refinanced its debt pile three years ago.

It enables the borrower to secure lower interest rates but can also see control of the company switch to the lender if shareholders attempt to appoint new directors.

This means only the existing board has the power to appoint directors,

In today’s trading statement, Johnston Press said it continues to make good progress with its strategic initiatives, and the board remains confident that trading for the full year will be in line with its expectations.

The company said the ‘i’ newspaper continues to perform very well, with total like-for-like revenues increasing 17% in the quarter (with print advertising up 14% year on year), while the newly re-launched ‘i’ weekend has seen its average circulation volume increase by 15,000 in its first three weeks.

It says other Saturday relaunches during the period include the Lancashire Post and the (Ulster) News Letter, both of which delivered a 3% increase on their base sale.

The group achieved record web traffic during Q3, led by the Yorkshire Evening Post growing 64% year on year. There has been significant growth in digital native advertising in Q3 with growth of 190% over Q2.

The strategic sales change programme has been changed, with 60% of advertising accounts moving into tele-sales, serviced from the Sheffield-based Media Sales Centre, which will now be moving to new offices to accommodate this growth part of the business.

Digital display advertising growth of 16% has been driven through the use of user data to target customers and grow advertising yields. More than 25% of local campaigns in Q3 had data-led targeting, resulting in an increase in yield of up to 22%. That user data is being bolstered by new initiatives launched during Q3 to register users on JP sites and build first-party data, to increase page yields.

Highlighting the shift to digital sales locally, The Scotsman in Q3 generated a 35% increase in total local advertising year on year, driven by 47% of local display revenue now coming from digital products.

On 29 March 2017, the board announced that it had commenced a strategic review to assess the financing options available to the Group in relation to its £220m 8.625% senior secured notes which become due for repayment on 1 June 2019.

During a period of initial consultations in April and May, certain of the group’s largest shareholders and bondholders expressed views regarding refinancing options and their broad parameters.

Following these initial consultations, the board engaged in preliminary discussions with the pension trustees of the Johnston Press Pension Plan in relation to potential amendments to the pension scheme.

On 10 October, the board announced that it was in talks with its largest bondholders regarding the formation of an ad hoc committee of bondholdersto consider amendments to the group’s capital structure, and that committee has now been formed.

Mr Highfield said: “Our key strategic priorities of continuing the success of the i newspaper and growing digital revenues have both shown strong gains during the period. It is significant that The Scotsman saw strong year on year advertising growth in Q3, with almost half of that coming from digital, driven by both audience growth and increased monetisation from data-driven targeted advertising.

“A significant amount of work is being done on the strategic review of financing options and we are pleased with progress to date.”