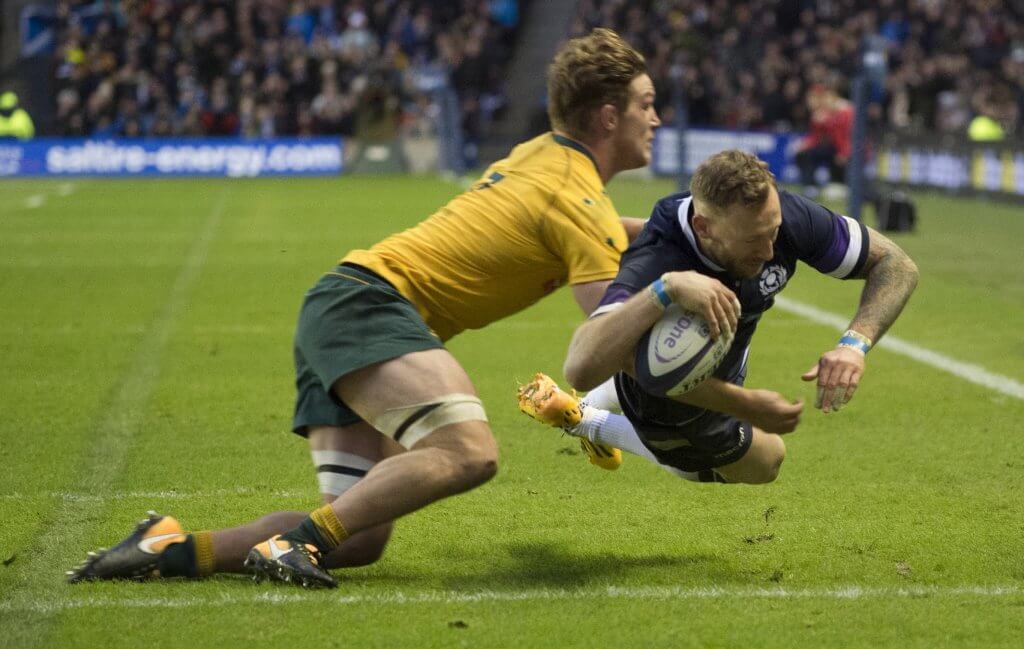 Scotland ran up a record victory over the Wallabies, scoring eight tries to delight a delirious home crowd.

The hosts were without Stuart Hogg who suffered a pre-match knock, but were helped when Australian front row Sekope Kepu was dismissed just before half-time.

The one-man advantage only added to Scotland’s confidence as they pummelled an unusually under-par Australian team ranked third best in the world.

Scotland coach Gregor Townsend said the team kept their mindset and described some of their play as “excellent”.

“It’s an amazing result. To score this many points against the world number three side is brilliant,” he said. “Of course you have to take into account the red card but we kept the mindset of wanting to work hard and we got our rewards.

“We showed what we were about and it takes a lot to show that in attack. It wasn’t perfect but it suited us to have a one-man advantage.”

Byron McGuigan, making his first start as a replacement for Hogg, was named man-of-the-match after scoring two tries.

He said: “It was fantastic to get such a win against a world class team. I was blown away by the crowd and the performance. The boys have been working really hard across all three Tests and for it to pay off like this is outstanding.

“An awesome achievement from everyone. We were really unlucky last week and to follow it up like this is amazing.”

With just two minutes on the clock Reece Hodge, a long-range specialist, had a chance to open the scoring for the visitors but he could not get the angle right. Jut 12 minutes later Australia were  penalised for offside and Finn Russell put Scotland ahead.

The hosts went further ahead when Byron McGuigan raced on to a loose ball and jigged his way past his opposite number Hodge to score the first try of the game and Russell converted.

A try from Tevita Kuridrani marked a comeback for the Wallabies just after the half hour mark and they went ahead just before half time when a Scotland mishap on the halfway line was picked up by Bernard Foley.

Then came the turning point in the game when Australian front row Sekope Kepu shoulder barged Hamish Watson in the head and after the TMO was inspected he was ordered off.

Soon after the re-start Ali Price put Scotland back in front with a try, converted again by Russell giving Scotland a 17-12 lead at the break.

Australia drew level when Kurtley Beale squeezed through the Scotland defence, but Foley missed the conversion.

Sean Maitland restored Scotland’s lead with a driving run to the corner and the home side’s player advantage began to show as the five-man front row pushed forward and some good work from front row replacement Jamie Bhatti allowed Johnny Gray to go over under the posts.

Huw Jones made it five tries in five international matches but Russell’s kick was just wide of the left post.

McGuigan added to the visitors’s agony after receiving in the corner and touching down for his second try. Another miss from Russell kept the score down.

A Lopeti Timani try, converted by Foley, gave the back row his first international try to narrow the deficit as Scotland appeared to lose some of their early discipline.

John Barclay took Scotland past 40 points with the his team’s seventh try. Russell had little trouble converting in front of the posts.

In the closing minutes McGuigan touched the ball down though Kurtley Beale slapped the ball away. It was deemed a deliberate knock-on and he was sin-binned for the second game in a row.

With the visitors well-beaten, Stuart McInally took Scotland’s tally past the 50-point mark, converted by Russell.