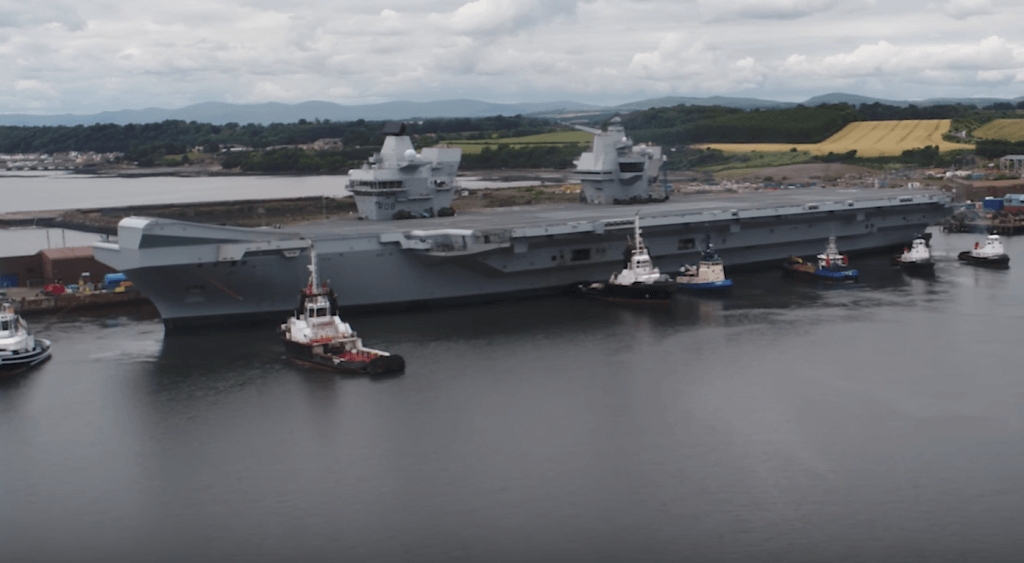 Babcock International has delivered a pre-Christmas blow to 250 workers at the Rosyth Dockyard in Fife who have been told they will lose their jobs.

The posts will be axed as the £6 billion contract to build two Royal Navy aircraft carriers nears completion. Managers said the “one-off” nature of the carrier programme meant job losses were inevitable.

The company said its employees were a priority and prospects for Babcock’s operations at Rosyth “remain good”.

A spokesman said: “Unfortunately, given the one-off nature of this large-scale programme, as the ships begin to be handed over to our customer, we must inevitably reshape our business to remain competitive and take on new challenges, which we firmly believe exist for Rosyth.

“However, medium term opportunities cannot compensate for the 250 or so specific roles and capabilities no longer needed with the slow-down of the QEC work.”

The 65,000-tonne HMS Queen Elizabeth is the largest warship built in Britain and has been completed. It will be commissioned into the Royal Navy next week.

The HMS Prince of Wales is also nearing completion, prompting a review of workforce requirements.

The CSEU – incorporating GMB and Unite trade unions – called on the company to ensure there will be no imposition of compulsory job cuts.

Babcock confirmed to workers that a statutory redundancy consultation period would run until the end of January. The trades unions at the dockyard have demanded that reductions are achieved through voluntary means only.

Unions have also warned that the announcement re-emphasises the need for the Ministry of Defence (MoD) to do more to end a culture of ‘feast and famine’ on shipbuilding contracts across the UK.

CSEU Scotland Chair Gary Cook said: “The aircraft carrier contract has delivered significant levels of employment in Rosyth for nearly a decade but as the work on the carriers draws to end, it poses serious questions for the future.  This cannot be the start of a downward spiral for Rosyth.”

Unite convenor at Rosyth, Raymond Duguid added: “These proposed job cuts are a confirmation of the failure of the UK Government’s National Shipbuilding strategy. Yards like Rosyth cannot thrive on piecemeal work and this government should be awarding all complex warship and fleet auxiliary vessel manufacture to UK yards.”

SNP Defence procurement spokesperson Douglas Chapman said the news was a “crushing blow” for the workforce.

Babcock will enter a period of consultation with the workforce with the intention to manage this process as much as possible through volunteers and possible redeployment.

Mr Chapman, SNP MP for Dunfermline and West Fife said: “It is a crushing blow for the staff hit by this announcement, particularly at this time of year.

“Only yesterday I asked the Secretary of State for Defence at Westminster what reassurances he can give to workers at Rosyth following the departure of the carriers and if he would visit Rosyth.

“Now – less than 24 hours later- this dreadful news is delivered to Dockyard workers. It is deeply worrying that these jobs are lost as the UK Government launches their new industrial strategy.

“The Secretary of State said he was ‘incredibly grateful for the amazing work’ the Rosyth workforce have done on the carriers – but people in my constituency cannot live on a Tory Minister’s platitudes.

“They need follow-on contracts and deals, and this latest news underlines the importance of continuing the fight for future Type 31e, fleet auxiliary ships and the other contracts to come to Rosyth.

“In the meantime, I will be following up on yesterday’s parliamentary question and ask him to join me in Rosyth to ascertain exactly what work can come to Rosyth so we do not lose any more of the skills, talent and dedication of the workforce here in West Fife.”

Shadow Secretary of State Lesley Laird said: “This is a bitter blow for workers in Rosyth and underlines again the need for a proper shipbuilding strategy which avoids these fluctuations in the workforce.

“Coming in the week that the UK government announced an industrial strategy it shows that protecting jobs for the long term has not been high enough up the agenda.

“This underlines the need for the government to play a much bigger  role in our economy, creating and protecting well paid, high skills jobs for the long term.”

Scottish Liberal Democrat leader and North East Fife MSP Willie Rennie said: “Even though we knew this day would come it does not make it any easier.

“Building the biggest warships ever for the Royal Navy has been an enormous challenge and not without its difficulties but the workforce has equipped themselves incredibly well.

“This will be an opportunity for some to move onto new challenges using the skills and knowledge they have developed working for Babcock. For others their role in the success of Babcock will continue as they find other positions in the company.

“The boom and bust approach in the warship building sector is expensive and wasteful of skills and expertise.

“Although a lot of work was done to smooth out the peaks and troughs of employment for the Carriers the government must work even harder to prevent the large scale loss of skilled workers in the future.”