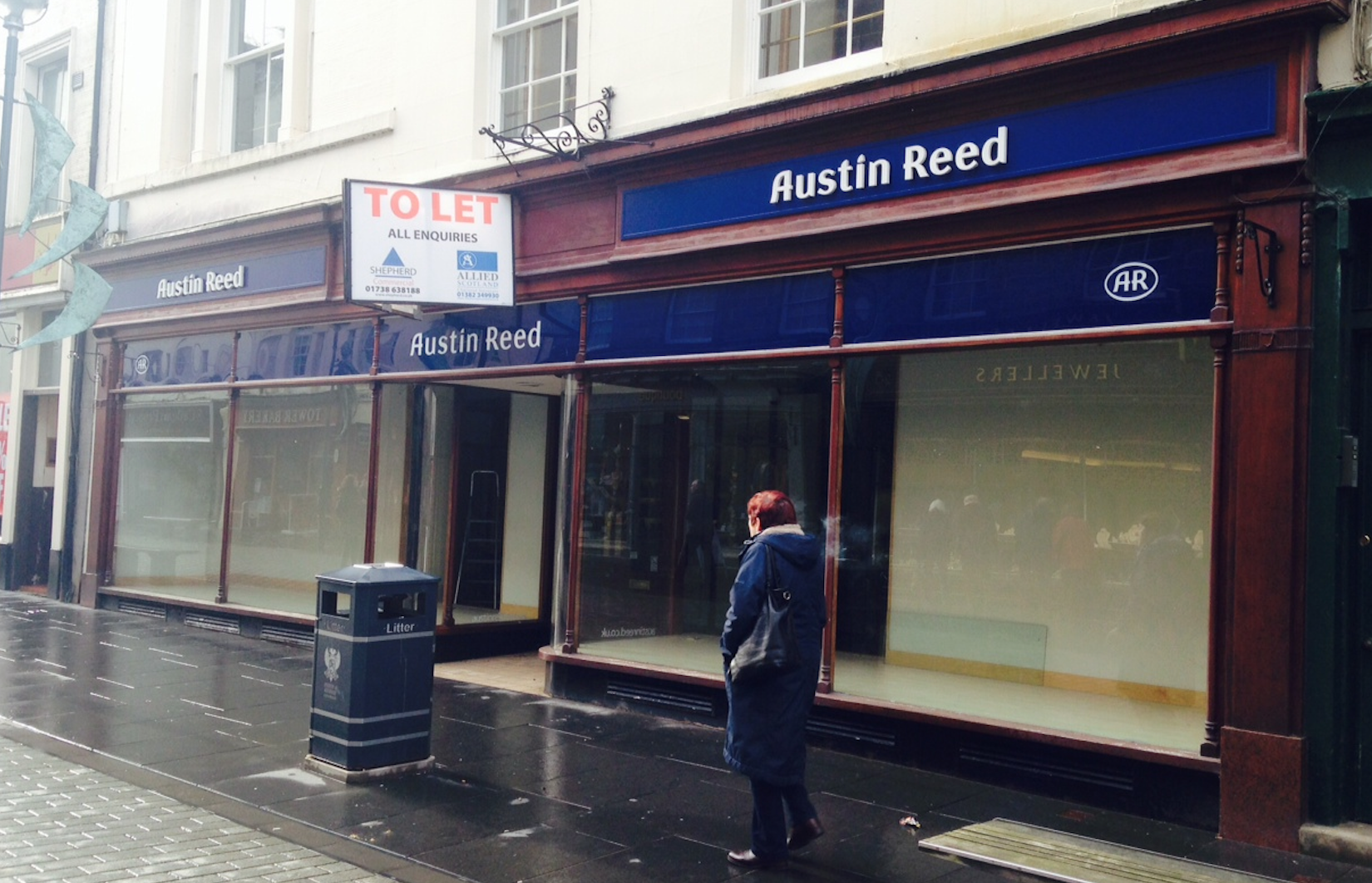 Empty shop units, like this one in Perth, are on the rise (photo by Terry Murden)

Scottish private sector companies made a positive start to the fourth quarter, while retailers have seen a decline in footfall ahead of the key Christmas shopping season.

Output growth among private businesses quickened at the fastest pace since July. Employment also increased and firms remained upbeat towards growth prospects, despite rising input costs, according to the Bank of Scotland purchasing managers index.

However, the retail sector continues to bear the impact of higher costs and the drift of shopping online,

More than one in ten of Scotland’s shops is empty for the first time in more than two and a half years, while the number of shoppers on the streets fell for a sixth consecutive month.

Footfall shrivelled across high streets, shopping centres and retail parks and at a pace faster than witnessed over the past quarter as a whole as consumers tighten their belts and shop online.

Shop vacancies have risen over the past two years and is a cause of growing concern, with Scotland’s vacancy rate now sitting above the UK average.

David Lonsdale, director of the Scottish Retail Consortium, described the figures as “a dreary set of results”.

Coming just ahead of Black Friday and six weeks before Christmas, retailers are hoping for a boost from the Chancellor and the Scottish Finance Secretary who both deliver their budget statements.

Mr Lonsdale said: “Retailers will be looking for convincing action to lift consumer spirits at a time when higher inflation and costs are eroding household spending power.

“The industry will also be looking for concrete action to stem the relentless rise in government-inspired cost pressures affecting firms, beginning with the projected 4% rise in business rates which is on the cards for April and which will only make it even more expensive to operate physical stores.”

Diane Wehrle, marketing and insights director at Springboard which compiles the data, said: “October delivered a black trading cloud for Scotland ahead of the Christmas sales storm; not only was the 3.3% drop in footfall the worst result for October since 2011 when it declined by 9.4%, but it was also higher than the result for the month of October in the previous three years which ranged between +0.5% and -0.1%.

“The signs of the gathering cloud have been evident in footfall trends for a while; with October’s result leading to the longest period of continual decline since November 2015.

“And a drop in footfall during retail trading hours of 7.4% in high streets – alongside daytime drops in footfall of 2% in shopping centres and 1.1% in retail parks – provides definitive evidence of consumers tightening their purse strings.

“It is unsurprising therefore that the vacancy rate in Scotland has risen once again, and at 10.5% it has now returned to the level it was in July 2015”.

The Scottish rate contrasts sharply with the rate of 9.3% across the UK which dropped from 9.6% last quarter.