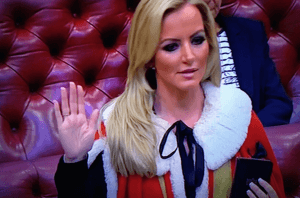 Lady Mone has revealed she will launch a new lingerie company just months after announcing she intended to retire from business.

The tycoon used social media to announce that she is returning to the industry after becoming “disappointed” with what is on offer.

She intends to introduce an underwear line next year and has said it will be bigger than her previous company Ultimo which she founded with ex-husband Michael in 1996.

“After a 3 year break & being disappointed with the industry I’m coming back with a bang. My own brand will launch in 2018 & will be bigger than all the others, including Ultimo,” she tweeted.

In February she told her Twitter followers that she intended to retire from business and speaking engagements within three years.

She was made a peer of the realm under former Prime Minister David Cameron’s government and led an inquiry into the problems of setting up a business in low income areas.

Lady Mone is now in a relationship with fellow Glaswegian Doug Barrowman, 51, a billionaire who has 50 businesses, a private jet, six homes and 15 cars.