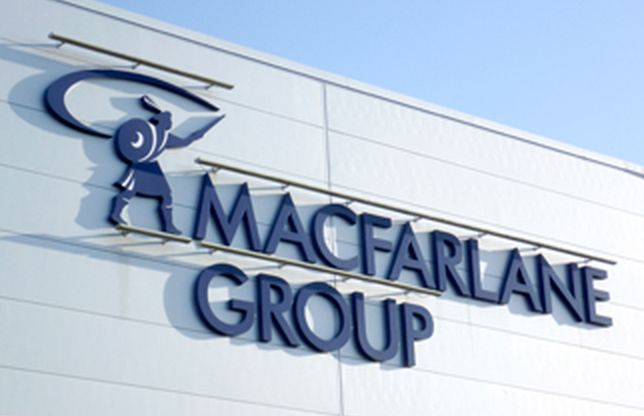 Packaging company Macfarlane Group said it expects profits to be well above last year as  the momentum achieved in the first half has continued in the second.

The Glasgow-based business said this was because of improving organic growth and the continuing benefit from acquisitions.

In a trading update for the past four months the board said it is confident that its full year expectations will be met through its focus on the e-commerce sector.

Sales for the year to date in packaging distribution have increased by 11% and the recent acquisition, Greenwoods, is performing well in the final quarter of the year.

Gross margins achieved are at similar levels to last year, reflecting the effective recovery of recent input price increases.  Operating profit for the full year in the division is expected to be well above that achieved in 2016.

Combined sales from the businesses in manufacturing operations are 3% below 2016, principally due to a continuing focus on higher margin sales.  Operating profit for the full year in the this division is expected to be similar to 2016 levels.

The net effect of these factors is that Macfarlane Group’s profit before tax for 2017 to date is well above the corresponding period in 2016 with a good contribution from acquisitions and this trend is expected to continue for the remainder of the year.

Bank borrowings of £14.6m at 30 June are expected to reduce by the end of the year, reflecting the group’s traditionally strong working capital inflows in the final quarter.

Stuart Paterson, chairman, said: “I am pleased to report that Macfarlane Group’s performance in the second half of 2017 has continued to reflect the good progress demonstrated in the first half.  The board remains confident that our full year expectations will be met.”