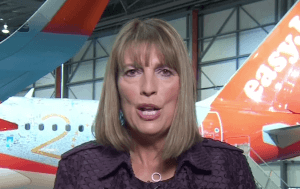 EasyJet cut its final dividend as the budget airline reported a decline in profits following the slump in the pound.

Over the year, easyJet flew 80 million passengers. All but 13 seats on a typical 180-seat flight were filled, which the airline says reflects “strong network positions and customer proposition”.

Despite the profits slump shares in the company gained about 5% in earl trade as the board said revenue trends in the first quarter of the new financial year were “encouraging”.

Delivering her final results before heading off to ITV, she said the collapse of Air Berlin and Monarch and the pilot-rostering issues faced at Ryanair had helped easyJet.

“Our planned approach of achieving number one or two positions at Europe’s leading airports, friendly and efficient customer service and a continuous focus on sustainable cost control has put easyJet at a strategic advantage during a period when there have been bankruptcies and some airlines have struggled operationally.”