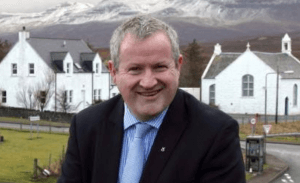 Chancellor Philip Hammond will be urged to deliver a Budget on the basis of Britain’s continued membership of the single market.

SNP Westminster Leader Ian Blackford (pictured) will say in a speech in Brussels today that this would help to bring calm to the markets and give businesses the confidence they need to invest.

Mr Blackford will speak of the “chaos” engulfing the UK government over Brexit when he addresses the European Policy Centre.

It comes as the EU Withdrawal Bill has begun its progress at Westminster – with almost 500 amendments to be debated.

Mr Blackford will say:  “The lies and deceit of the Brexit campaign for Leave have been called out – never again will the public trust the Conservatives.

“We see that highlighted in the recent approval ratings for the Prime Minister herself – scoring an all-time low last week – just 26% of voters now think Theresa May will “get the right deal for Britain in the Brexit negotiations” and 66% of voters say they disapprove of the way the government is handling Brexit negotiations.

“UK politics has hit a dead end. There’s no way forward, nor a way back for Theresa May. She must create a new path – and she can do that – by working across the political spectrum, showing some respect to the constituent parts of the UK and dropping her obsession with a no deal.

“Next Wednesday, the Chancellor will deliver his budget in Westminster. That budget must be delivered on the basis of the UK’s continued membership of the single market. This will not only settle the markets but more importantly will give business the confidence it so desperately needs to invest.

“The EU Withdrawal Bill is damaging and unworkable, and Theresa May’s government is in a state of chaos. This speech to the European Policy Centre is an opportunity to raise these issues and look ahead.

“A week before the Chancellor delivers his Budget amidst all this Brexit mess Philip Hammond has to put a stop to the endless failed austerity and also give some confidence to the business community so anxious about Brexit – by delivering a Budget based on continued membership of the Single Market.

“The dangers of a Hard Tory Brexit are now obvious for all to see and completely avoidable.'”