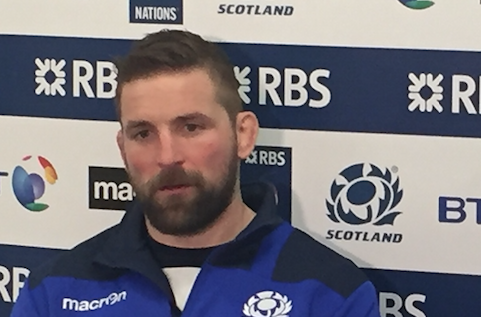 John Barclay leads his team into battle against Australia after last week’s narrow loss to the All Blacks.

Having come close to defeating the All Blacks, Scotland captain John Barclay is anticipating another tight encounter when Australia visit Murrayfield tomorrow.

Gregor Townsend’s side pushed the world champions all the way, only being denied a match-winning score in the dying seconds of the match.

The Scots defeated the Aussies in Sydney on their summer tour Down Under and go into tomorrow’s final Autumn International with confidence high after a stirring display against New Zealand.

“I think it’s exciting for players and fans alike, you know it’s going to be a tight game,” said the skipper.

“When we have played against them in the last couple of years they have been quite tight games for whatever reason, very physical games and very fast games.

“We have been quite evenly matched. They play as good, if not a better brand of attacking rugby than New Zealand.

“They play a very fast game and get very clean ball at the breakdown, so it is a big challenge.

“They have some quality players and some big ball carriers in the forwards and some pretty handy and skilful backs, so like in any game we will have to try to slow their momentum down a bit and try to stifle their creativity.”

Scotland have been forced into making a late change for the game, with Alex Dunbar failing to recover from a concussion suffered last week and being replaced by Pete Horne.

The Wallabies come into the match looking to bounce back from a heavy defeat at Twickenham last weekend, although the 30-6 scoreline flattered England a bit.

Some observers reckon Michael Cheika’s team is on the decline, although Barclay does not subscribe to that view.

He said: “They were in the World Cup final a couple of years ago and play against the best team in the world every few weeks, so it’s not like they play against pub teams.

“They have some of the best players in the world. They’ve always been one of the best teams and maybe one of the natures with the beast with the media and social media is that they are always going to be under pressure.”