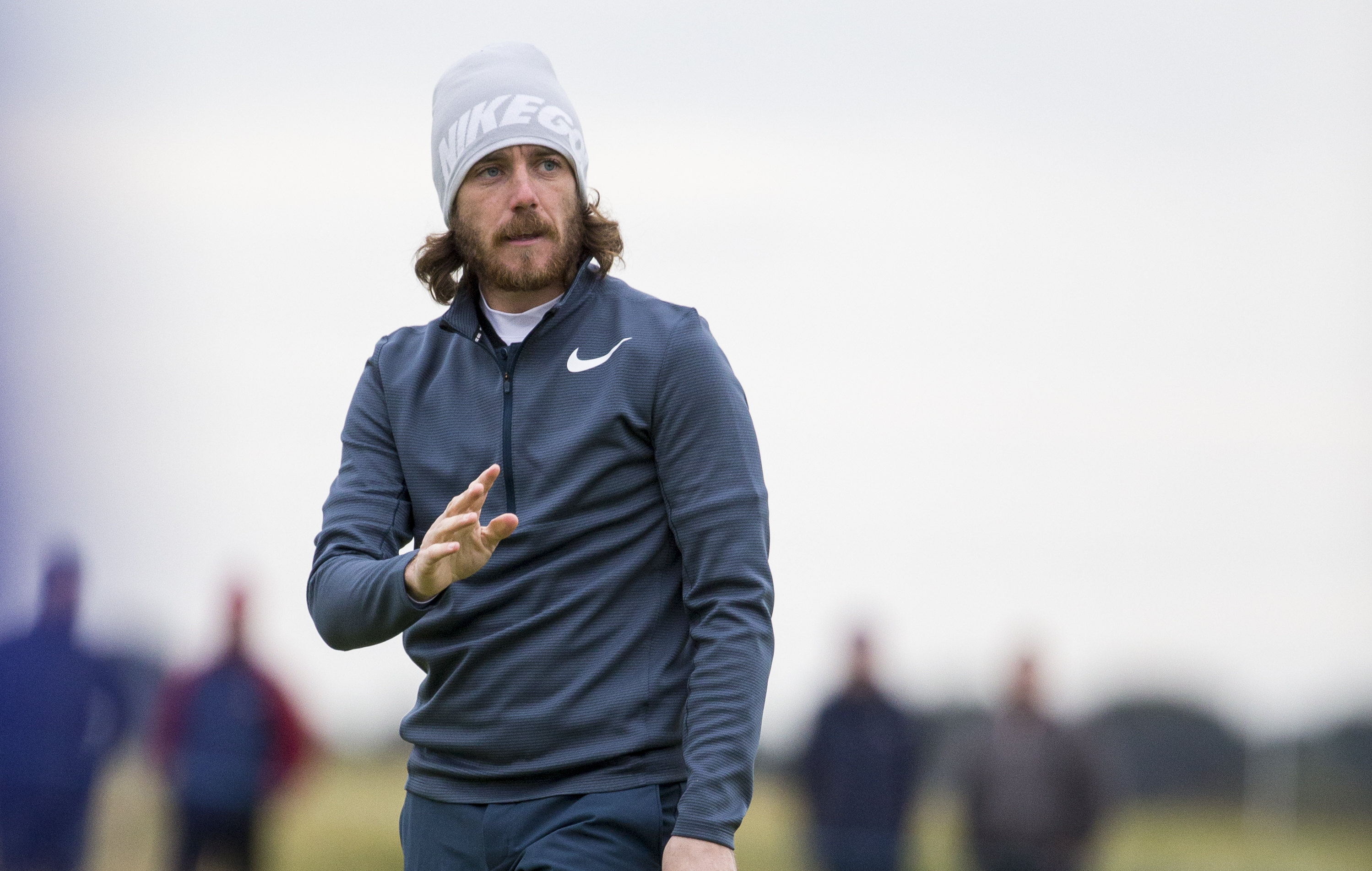 Tommy Fleetwood set a new course record at Carnoustie with a stunning second round of 63 (pic: SNS Group).

They say Carnoustie is the most difficult of the three courses in the Alfred Dunhill Links Championship but it looked anything but that as outstanding young golfer Tommy Fleetwood and defending champion Tyrrell Hatton powered to the top of the leaderboard.

Both played near faultless rounds. Fleetwood’s 63, which included nine birdies, was a new course record, while there were seven birdies in Hatton’s 65.

For Fleetwood, victory would be a unique way to celebrate the birth of his son Franklin last week.

For Hatton it opens up the realistic prospect of becoming the first man ever to win back-to-back Alfred Dunhill Links titles.

They now share the lead on 11-under-par, one ahead of Belgium’s Nicolas Colsaerts, and renew their battle in their third rounds at Kingsbarns. Ireland’s Paul Dunne and Germany’s Marcel Siem are a further shot back.

Fleetwood said: “Any time you have a course record, especially on a golf course like this, it’s brilliant to have. I’m very proud at the moment.”

He has only played one week in seven leading up to the Alfred Dunhill Links and added: “I have been practising while I was at home but I really enjoyed being back in competition where every shot counts. I was pleasantly surprised when I came on to the range on Tuesday.”

Hatton said: “I’m happy with today’s round. Got lucky a couple of times, but obviously you need that. The putter came alive for me.

“It’s great to be back and have good memories from last year. I’ve come into this event with a bit of form and I’m happy that I’m carrying it on. Hopefully I can have a good one at Kingsbarns.”

Leading Scot is David Drysdale who had a 67 at Kingsbarns to remain in contention three shots behind the leaders, along with Kiradech Aphibarnrat, Bernd Ritthammer and Matt Wallace.

Rory McIlroy, playing with father Gerry in the Team Championship, had a 71 at Carnoustie and is on level par for the Championship.

Former winner Paul Lawrie had to withdraw through injury, the Aberdonian revealing that is his season over until he sees a specialist in November about his troublesome left foot.

The Alfred Dunhill Links Championship, conceived as a celebration of links golf, is played over three of the world’s best known and respected links courses – the Old Course at St Andrews, the Championship Course at Carnoustie and the highly-regarded Kingsbarns Golf Links.

With a prize fund of US$5 million, the championship incorporates two separate competitions – an individual professional tournament for the world’s leading golfers and a team event in which the professionals are paired with some of the most celebrated amateur golfers which creates a unique atmosphere.

Leaders in the Team Championship are Gregory Bourdy and Aidan Heavey on 21-under-par, one shot ahead of Yikeun Chang and Erwee Botha.