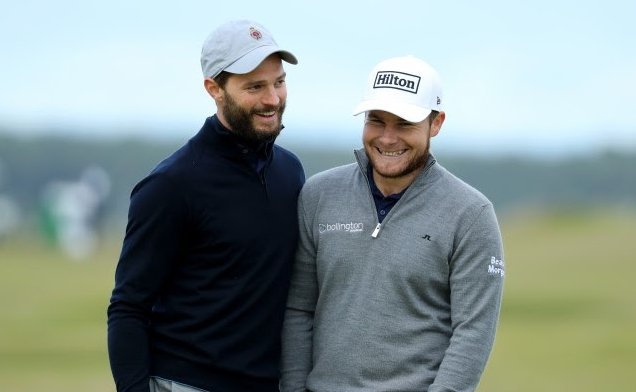 Defending champion Tyrrell Hatton has once again been paired with actor Jamie Dornan in the Alfred Dunhill Links Championship which begins tomorrow.

Two of the most successful pairings in the Team Championship have been drawn together again – Padraig Harrington & racehorse owner JP McManus, who won in 2002 and 2006, and Robert Karlsson & Celtic FC’s biggest shareholder Dermot Desmond, victors in 2008.

One of the most popular teams for the galleries to follow at the Old Course St Andrews, Carnoustie and Kingsbarns will be world No. 6 Rory McIlroy and his father Gerry, who last played together in 2014 during which time Gerry celebrated his 55th birthday.

“It’s been a tough few years but I still truly believe I have what it takes to be one of the best,” said Donald.

“I love the Dunhill Links. Victory is amazing anywhere, but to have it walking down the 18th at St Andrews is something all of us as professionals aspire to. I have had some success at the Dunhill before, coming close to winning in the past, and I love the challenge of links golf.”

Over the course of four rounds, two competitions will run side by side as players tee it up at the three courses. Each professional will be paired with an amateur for the duration of the tournament, with players alternating between the three different courses.

The pros will compete in an individual stroke play event as per a regulation week on the European Tour, but will also be part of a Pro-Am competition involving their partner, with the best score on each hole from every pair taken.

After three rounds the field is reduced to 60 pros including ties, plus the leading 20 Pro-Am teams, with the final round being played at the Old Course.

Harrington can lay claim to an enviable record in this tournament, having triumphed in 2002 and 2006. Not only did the three-time Major champion add those titles to his European Tour trophy haul, but he won the pro-am tournament in both years alongside businessman and fellow Irishman JP McManus.

In 2003, former European Ryder Cup captain Sam Torrance won the team competition in the company of his son, Daniel, who was just 15 years old at the time.

The prize fund this week will be $5million, with the winner of the individual title pocketing a cheque for €711,073.

Entry is free at all venues for the first three days of competition.