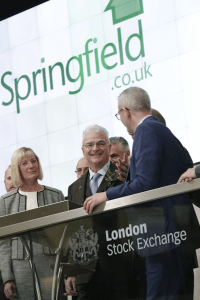 Shares in Springfield Properties opened at 111p and closed at 116.5p, a healthy premium to the 106p placing price when the company made its debut on the Alternative Investment Market today.

The Elgin-based company raised £25 million in an initial public offering (IPO) in a placing of 23.5 million shares giving it a market value of £87m. Current shareholders retain 70% of the stock.

Sandy Adam, executive chairman (pictured at the London Stock Exchange), said: “The level of support shown by our new investors on our admission to AIM is gratifying. It is a real endorsement of the work our employees have put into building a strong and growing business.”

The FTSE 100 opened up 3 points and stayed in positive territory, led by mining stocks, until the closing minutes when it ended the session down 8.47 points at 7526.97 ahead of inflation figures to be published tomorrow and as Prime Minister Theresa May holds more Brexit talks in Brussels.

Market reports suggest China is offering to buy up to 5% of Saudi Aramco in a move that could give Saudi Arabia the flexibility to consider various options for its plan to float the world’s biggest oil producer.

Chinese state-owned oil companies PetroChina and Sinopec have written to Saudi Aramco in recent weeks to express an interest in a direct deal, according to the Reuters news agency.