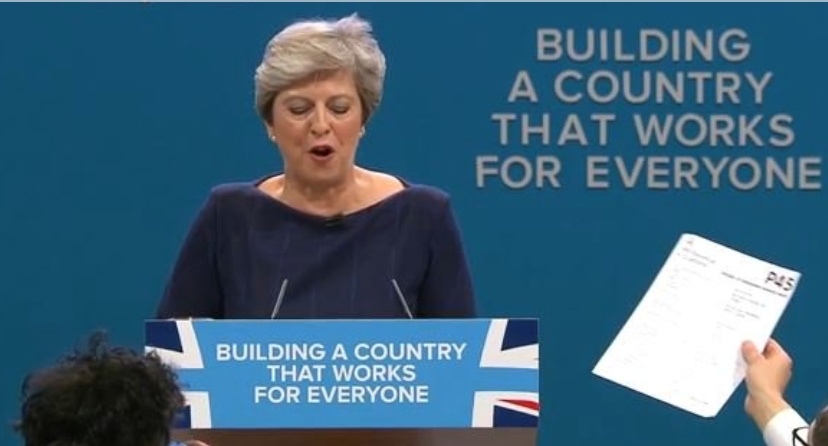 A spluttering Theresa May was facing a backbench rebellion last night after struggling through a speech to the party faithful in which she admitted her mistakes and attempted to rally her supporters around “the British dream”.

Interrupted by coughing fits and prankster Lee Nelson, who handed her a fake P45 “from Boris Johnson”, Mrs May drew heavily on the diversity of Britain as a symbol of its strengths and a source of innovation.

She responded to Labour leader Jeremy Corbyn’s statist policies with a defence of the free market and addressed concerns over Brexit and the NHS. She pledged a further £2 billion for affordable housing as part of a campaign to “reignite” home ownership.

The Prime Minister was forced to improvise after Lee Nelson slipped past security, which at least offered her a welcome breather.

At one point the Chancellor handed her cough sweet, but it became almost unbearable to watch, and some wondered why she was not given a time-out to allow her to continue properly.

Her constant throat-clearing and sips of water detracted from what she was saying, though the interruptions and her dogged determination to carry on may have been a metaphor for her stuttering, fragmented premiership.

“I hold my hands up. I led the election campaign and I am sorry,” she said, accepting blame for the mis-timed, badly-orchestrated campaign which wiped out her party’s majority at Westminster.

Despite the regular and obligatory standing ovations her address failed to impress many in the hall and there were reports of up to 30 backbenchers plotting against her, describing Mrs May as “limping like a broken horse into oblivion” and calling for talks on her departure to be “accelerated”.

In a further blow, two of the letters fell off the ‘Building A Country That Works For Everyone’ backdrop behind her.

Supporters leapt to her defence. James Cleverly said he was “proud” of the Prime Minister for getting through the speech and John Redwood said MPs supported her “strong message”.

But recriminations began last night, with an unnamed Conservative MP reportedly sayin:  “Yesterday I thought she was two crises from the exit, now it’s just one… The question is now whether it’s kinder to all concerned to bring this to a head.”

Mrs May struggled through the speech despite her obvious discomfort. She avoided giving away too much on Brexit, mentioning it in just 334 words in a speech of more than 7,000. She said there will be a continuing “partnership” with the EU, but hinted at a “no deal” scenario by saying the government will “prepare for every eventuality”.

She did offer EU citizens in the UK some relief by saying: “You are welcome here.”

Addressing hate crimes and the aggressive tone in British politics she said: “We need to “consider how we conduct our politics in this country”, adding that there is a problem when “a leading journalist from a national broadcaster has to hire bodyguards just to be able to do her job”.

She said the energy market punishes loyalty with higher prices and is to fulfil its manifesto commitment to put a price cap on energy bills “to bring an end to rip-off energy prices once and for all”.

Her defence of the Union included a firm rejection of any second independence referendum for Scotland.

Edinburgh West LibDem MSP Alex Cole-Hamilton said Mrs May’s housing announcement was a “complete con” after it emerged that the headline promise of £2 billion would amount to just 25,000 houses across the UK spread over five years.

“Theresa May’s plans on housing are a complete con. The UK Conservatives have been forced to admit their new plan is for just 5,000 homes per year. That would mean just 500 for Scotland under the normal Barnett process.

“That is less than 1 percent of what Shelter say is needed.

“To show how the Conservatives have completely missed the scale of the problem, the waiting list in Edinburgh alone is longer than their entire UK plan would deliver. Even if they built every home here, it doesn’t solve the problem.”

Shadow Secretary of State for Scotland Lesley Laird MP said: “Theresa May and her party offers nothing but division and deprivation to the people of Scotland and the whole UK.

“As this Tory conference proved, they are more interested in fighting among themselves than fixing the very serious issues facing the people of this country.  The Tories have run out of ideas and they are running out of time.

The SNP Westminster Leader Ian Blackford said that Theresa May’s conference speech on the ‘British dream’ sounded more like a  ‘Tory nightmare’ to people hit by years of austerity and cuts.

The prime minister’s speech, beset with problems , showed a party hopelessly divided on Brexit and with no end of their failed austerity in sight, he said.