Government 'does not recognise' poll 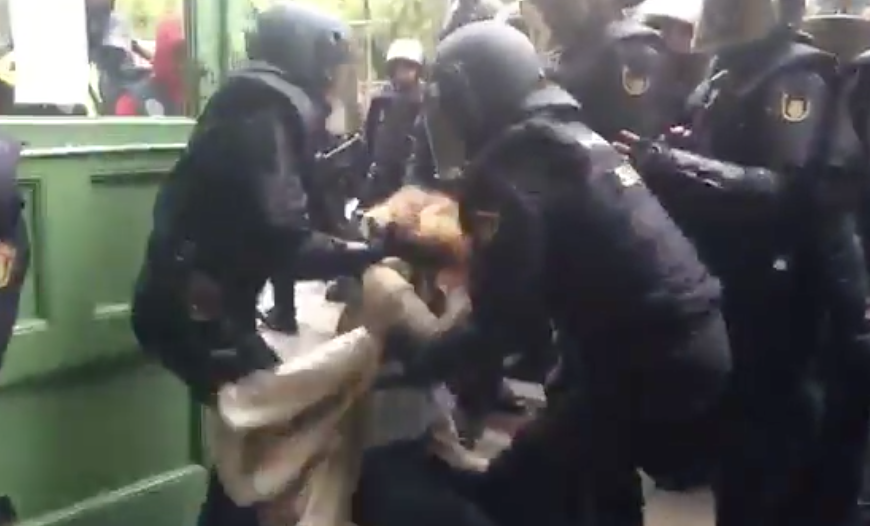 Police drag a woman out of a polling station

Spain’s government was facing international condemnation after a day of shameful and brutal reaction to the referendum vote in Catalonia.

More than 760 citizens were injured, including women beaten with batons by riot police who forcefully removed ballot boxes and broke up meetings of voters in an attempt to stop the poll taking place.

Prime Minister Mariano Rajoy denied the legitimacy of the referendum by claiming the majority had not wanted it.

But Catalan leader Carlos Puigdemont said the vote gave the region, a wealthy part of Spain with a population of 7.5 million, the right to become an independent nation.

He called on the EU to recognise the vote and to take action against the Madrid government for its actions.

More than 40 trade unions and Catalan associations called a region-wide strike on Tuesday due to “the grave violation of rights and freedoms”.

The Spanish interior ministry said 12 police officers had been hurt and three people arrested. It added that 92 polling stations had been closed.

In Girona, riot police smashed their way into a polling station where Mr Puigdemont was due to vote, and forcibly removed those inside. Mr Puigdemont voted at another station.

TV footage showed riot police using batons to beat a group of firefighters who were protecting crowds in Girona.

British Foreign Secretary declined to get involved, despite calls for him to summon the Spanish ambassador to account for the actions of the police which some compared to the worst excesses of the Franco regime.

Mr Johnson said it was a matter for the Spanish government and Spanish people.