Activist to seek other routes 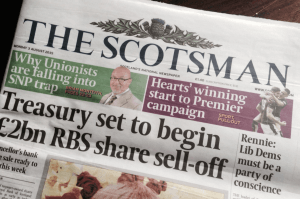 An attempt to oust the board of newspaper publisher Johnston Press has been frustrated by a little-used clause inserted into a refinancing deal with its banks.

The mechanism, known as a “”dead hand proxy put” was included in the company’s bondholder agreements when it last refinanced its debt pile three years ago.

It enables the borrower to secure lower interest rates but can also see control of the company switch to the lender if shareholders attempt to appoint new directors.

This means only the existing board has the power to appoint directors, a move which has halted a boardroom coup planned for Johnston Press by Swedish investor Christen Ager-Hanssen.

It would mean the publisher of The Scotsman and i newspapers repaying its bondholders immediately, which the struggling company cannot afford.

Dead hand proxy puts are a controversial form of poison pill used in the United States to ward off activists. They have been criticised for being used to thwart attempts to unseat shareholders.

The Johnston Press case is thought to be the first in the UK and the Telegraph reports that Mr Ager-Hanssen, who owns 12.6% is looking to new ways of taking control of the company.

He told the paper that he regarded Johnston Press’s dead hand proxy put “a grotesque abuse of fiduciary duty.”

He wants to replace the chairman Camilla Rhodes and is also said to be seeking to unseat chief executive Ashley Highfield and chief financial officer David King.

He is believed to have the support of other investors including Crystal Amber, the biggest shareholder with 18.2%.