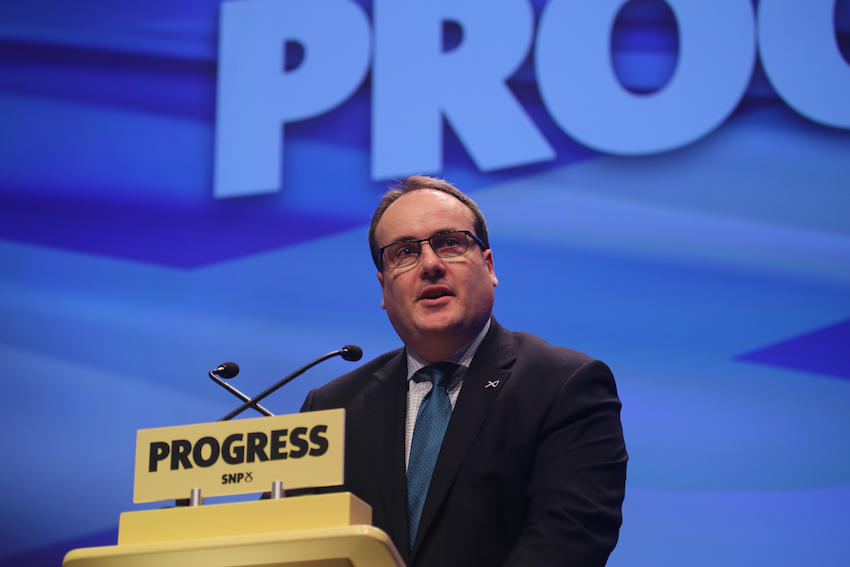 An indefinite ban on fracking in Scotland was confirmed today after MSPs reopened a debate over the country’s energy needs.

MSPs voted overwhelmingly on the Scottish government’s decision to prohibit the controversial method of oil and gas extraction, supported by Labour, the LibDems and the Greens, though their support was not unconditional.

The Scottish Parliament backed the Government’s amended motion by 91 votes to 28.

Speaking after the vote, Business Minister Paul Wheelhouse, said: “We undertook one of the most far-reaching examinations of unconventional oil and gas ever carried out by any government and created numerous opportunities throughout the process for discourse and debate.   Today’s vote is the culmination of that process, and represents a clear endorsement of our decision.

“In coming to a view on unconventional oil and gas, we carefully considered the findings of our extensive research alongside the results of our public consultation.

“As a Government, and as a Parliament, we have a responsibility to make decisions in the interests of the people whom we represent, confident that the choices we make will not compromise health and safety or damage the environment in which we live, nor undermine our efforts to achieve Scotland’s annual statutory greenhouse gas emissions targets.

“It was clear from the response to our consultation that there is no social licence for unconventional oil and gas to be taken forward at this time, and the research we have conducted did not provide a strong enough basis from which to address those communities’ concerns.

“The Scottish Government has said “no” to fracking in Scotland. Today the Scottish Parliament did the right thing for Scotland and endorsed our position.”

Speaking in the debate today, the Liberal Democrat MSP said the amendment would provide “further confidence about the longer term robustness of the ban while also setting it in the wider context of the energy strategy we need.”

Speaking after the Scottish Parliament vote, Mr McArthur said: “While it has been a long time coming, the Scottish Government has undertaken the necessary journey across the political landscape on fracking.

“Ministers are right to end the threat of fracking and to agree with Liberal Democrats that opening up a whole new front of carbon-based fuels and energy production would do nothing to help meet our climate commitments.

“Liberal Democrats will now be leading the calls for the government to stump up the investment needed for the development of the range of renewable energy and storage technologies Scotland will need to deliver a sustainable energy system and secure the jobs and wealth creation that come with it.”

The government first imposed a moratorium in January 2015 in order for scientific inquiries and a consultation to take place.

Following a statement in the summer that ministers wanted to confirm the ban Mr Wheelhouse announced at the SNP conference that the government “will not support the development of unconventional oil and gas in Scotland”.

Anti-fracking campaigners, however, were concerned about a loophole which would allow for the decision to be overturned and want a fracking ban to be stated in law.

Friends of the Earth Scotland’s head of campaigns, Mary Church, said: “A future Government could overturn this decision with the stroke of a pen, while a ban in law would require Parliament’s approval to undo the ban on fracking.

“Fracking is being banned in Scotland – end of story. There will be no fracking in Scotland, and that position could not be clearer,” she said.

Shale gas, which is produced from fracking, is currently processed in Scotland, at the Grangemouth petrochemical plant, but is shipped in from the US.

Supporters of fracking say it would allow Scotland to be more energy independent and to create an industry supporting thousands of jobs.

Scottish Conservative Party economy spokesman Murdo Fraser tabled an amendment which “disagrees with the Scottish government’s position of imposing a ban” on fracking.

He said it is “an ill-thought out decision which completely disregards scientific evidence”.

His amendment also regretted that the thousands of jobs that could have been created and the significant economic benefit and the research opportunities that fracking could have brought to Scotland will all now be lost to the country as a result.

UK Onshore Oil and Gas said the decision was “based on dogma, not evidence or geopolitical reality”, while the GMB Scotland trade union said it was “mired in dishonesty and “an abandonment of the national interest”.

However, green groups welcomed the decision as “excellent news”, with WWF Scotland saying that “climate science is clear” that fossil fuels should be “left in the ground”.

Friends of the Earth Scotland called it “fantastic news for communities and the environment” – but have also challenged ministers to “go even further”, saying the current proposal “falls short” of a full legislative ban.