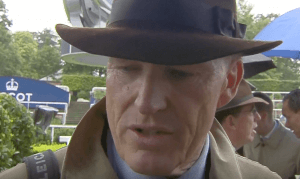 The filly, owned by Saudi prince Khalid Abdullah, added victory in Europe’s richest flat race to success in the Epsom, Irish and Yorkshire Oaks, as well as the King George VI and Queen Elizabeth Stakes at Ascot.

He added: “I kicked and she gave me four lengths and the race was over. She’s amazing and is an absolute freak. I love her. John is a genius.”

Run at Chantilly while Longchamp is being rebuilt, it was among the most competitive in years and was Gosden’s second success in three years following the victory of Golden Horn.

He ruled out another run this year in the Breeders’ Cup but said Enable will stay in training as a four-year-old.

“There would be every reason to keep her in training next year as a four-year-old, particularly with the new Longchamp opening.

“That would be exciting – to try to win the Arc on two different tracks.”

Cloth Of Stars was two and a half lengths away in second spot, with Sir Michael Stoute’s Coral-Eclipse and Juddmonte International winner Ulysses another length and a quarter back in third.

Stoute confirmed he is likely to return to the Breeders’ Cup Turf in America.

The O’Brien bandwagon rolled on at Newmarket at the weekend with two more group one winners taking the stable closer to Bobby Frankel’s tally of 25 in a single year.

US Navy Flag sprung a minor surprise in the Juddmonte Middle Park Stakes, giving O’Brien his 20th group one winner, after stablemate Clemmie had earlier landed the Cheveley Park Stakes.  Clemmie was installed as favourite for next year’s One Thousand Guineas. US Navy Flag may be aimed at the Dewhurst.

The re-scheduled Ayr Gold Cup, run as the 32Red Gold Cup at Haydock, was won by Donjuan Triumphant for Andrew Balding.