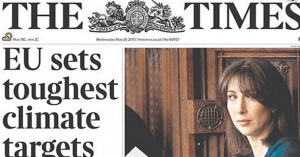 The Times and The Daily Telegraph were the only paid-for UK newspapers to see an increase in year-on-year circulation last month, though only because of discounted sales.

“Bulk” copies, which are distributed at locations such as hotels and airports and are free to the reader, helped push The Times‘ circulation 1.46% higher to 446,463 and the Daily Telegraph by 2.44% to 469,436, according to the latest ABC figures.

Metro, which is available free on public transport, increased its distribution by 9.8% and it remains on course to overtake The Sun as the UK daily newspaper with the biggest print run.

The Scotsman and The Herald are classed as regional newspapers so do not appear in these figures.