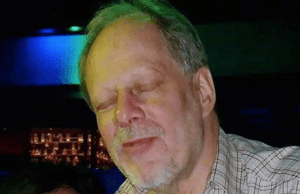 He is believed to have shot himself as police moved in on the Mandalay Bay hotel and casino overlooking the famous Las Vegas Strip.

The police found 23 weapons in two rooms. Paddock moved between rooms firing down on a defenceless crowd of 22,000 attending a concert in a nearby square.

Authorities have not said what kinds of weapons were found. The shooting was not believed to be connected to international terrorism. Instead, Paddock, a former accountant, appeared to be acting on his motives.

Islamic State claimed to be behind the attack, saying that Paddock had converted to Islam some months ago. But the group provided no evidence for its statement and this has not been taken as a serious admission.

He had booked into the room last Thursday with a pile of suitcases containing his weapons. Police found a further 19 firearms at his home in the small town of Mesquite, north-east of Las Vegas. Officers also found ammonium nitrate in Paddock’s car. The explosive found in his home was tannerite, the sheriff said.

Mr Lombardo said police had located a woman, earlier named as Marilou Danley, who was thought to have been travelling with the gunman before the attack, but was later located in Japan, and does not appear to have been involved.

Sheriff Lombardo said he was unable to give accurate details of dead and wounded, but confirmed two off-duty police officers were among those killed.

Gun Violence Archive, a website that tracks incidents and crimes involving guns across the United States, said this latest attack was the 273rd mass shooting in 36 US states this year.

It defines a “mass shooting” as four or more people being shot at the same time or location.

The shooting started while Country Music performer Jason Aldean was onstage. Witnesses described a chaotic scene of back-to-back bullets raining down from above, lasting for up to 10 minutes.

President Donald Trump described the shooting as “pure evil”. Speaking at a press briefing he said: “We are gathered together today in sadness, shock and grief.”

Nevada has some of the least stringent gun laws in the United States.

People are allowed to carry weapons and do not have to register themselves as a gun-owner.

Background checks are done when people buy guns, but they are also allowed to sell them privately.

But a White House spokesman said now was not the time for tighter gun control.