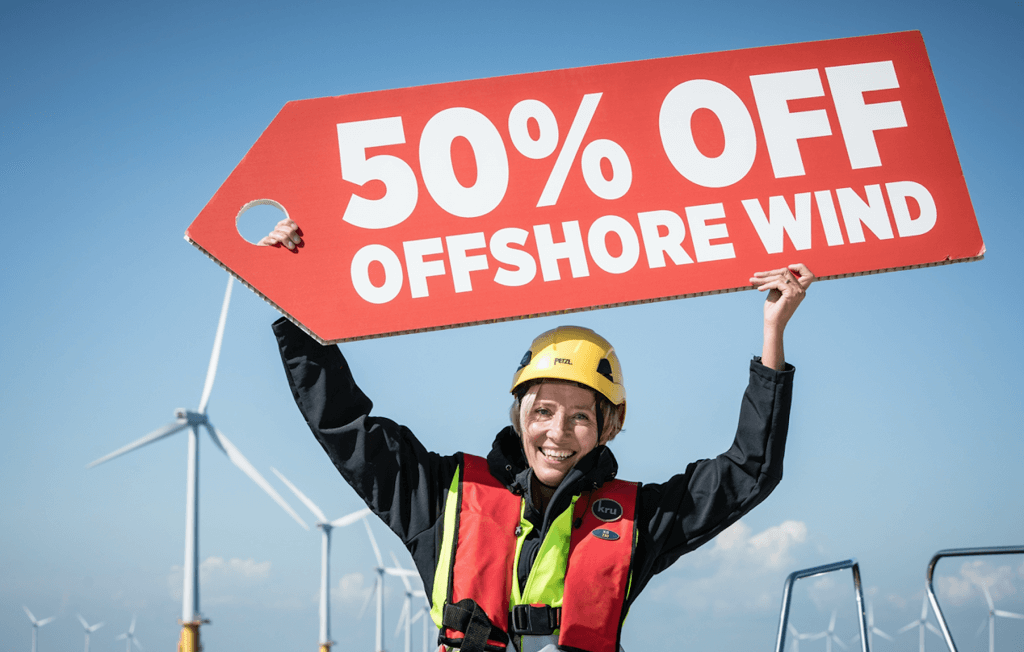 Offshore wind is now cheaper than nuclear power and gas generation, according to new figures.

The price paid for electricity from offshore wind farms has dropped by more than 50% in just two years.

This has surpassed expectations. Offshore wind is now the lowest cost option for large-scale, low-carbon power.

The Department for Business, Energy and Industrial Strategy and National Grid have announced that three offshore wind projects put in the lowest bids for Contracts for Difference (CfDs) in the latest bidding rounds.

The winning projects are DONG Energy’s Hornsea 2 off the coast of Yorkshire, Innogy and Statkraft’s Triton Knoll off the coast of Lincolnshire, and EDPR’s Moray off the northeast coast of Scotland. The new wind farms, with a total capacity of 3,196 megawatts, will power the equivalent of more than 3.3 million homes.

The cost of offshore wind has plummeted since the last competitive auction results were announced in February 2015, with the new prices on average 47% lower than they were just over two and half years ago.

As expected, a key wave energy development in the North Sea was unsuccessful in the bidding round.

Atlantis Resources, majority owned subsidiary, MeyGen said a cut in revenue support for the first phase of the project was not sufficient to allow the project to secure a contract for difference in this auction where it was competing with established technologies such as offshore wind.

Atlantis is hoping for more success in the next allocation round and has begun talks with BEIS officials.

Tim Cornelius, chief executive, said: “We’ve made great strides in reducing our cost of generation so that we can slash our requirement for revenue support.

“However, I must acknowledge the difficulties of competing on a level playing field with established technologies like offshore wind, which has been operating at commercial scale in the UK for over a decade.

“It would be a travesty if the UK were to lose out on another emerging industry where it has established a first-mover advantage and where the cost of energy is on a steep downward trajectory.

“We expect our ensuing discussions with BEIS to focus on how the future jobs and growth benefits of the sector can be secured for the UK.  Our UK portfolio contains some of the best tidal stream sites in the world, and we support the ambition to ensure that the development of these sites is achieved through a UK focused supply chain rather than relying on imported skills and goods.

“We hope that the UK can continue to play a leading role in an industry it helped create over the past decade.

“The future of marine power is very bright and I am very excited about the outlook for Atlantis.”

The offshore wind prices announced today are cheaper than the cost of the 35-year contracts for new nuclear power of £92.50 per megawatt hour, and cheaper than the levelised cost of gas, according to figures from the Department of Business, Energy and Industrial Strategy.

RenewableUK’s chief executive Hugh McNeal said: “We knew today’s results would be impressive, but these are astounding. Record-breaking cost reductions like the ones achieved by offshore wind are unprecedented for large energy infrastructure. Offshore wind developers have focused relentlessly on innovation, and the sector is investing £17.5bn into the UK over the next 4 years whilst saving our consumers money.

“Today’s results are further proof that innovation in the offshore wind industry will bring economic growth for the UK on an industrial scale. The UK needs to establish new trading opportunities as we leave the European Union, and the UK’s offshore wind sector is a world leader in a global renewable energy market currently worth $290 billion a year.

“Today’s results mean that both onshore and offshore wind are cheaper than gas and nuclear. But this young, ambitious industry can go even further. The Government can help us by continuing to hold fiercely competitive auctions for future projects, as it has promised, and by putting offshore wind at the heart of its upcoming Industrial Strategy.”

Wind turbines have more than doubled their power capacity since 2007. The current generation of 8MW turbines have 260 foot blades, spanning an area the size of the London Eye.

With a single rotation, these blades generate enough energy to power a home for 24 hours. By the mid-2020s turbine capacities are set to double again, reaching 15MW. These advances in turbine technology are a big part of what has driven recent reductions in costs per megawatt hour.

Offshore wind farms can be built in just two or three years, minimising the risk of cost overruns and ensuring that technological advances are adopted quickly.

The sector is already delivering thousands of jobs and UK offshore wind is also attracting billions in foreign investment, and securing hundreds of international contracts for British companies. Future growth potential is enormous as the global market is set to boom over the next decade.