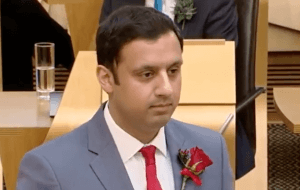 Scottish Labour leadership candidate Anas Sarwar has relinquished his right to access the assets in his family’s company.

His decision is a clear move to draw a line under the controversy surrounding his receipt of thousands of pounds from United Wholesale (Scotland).

The Glasgow MSP said he has always been fully transparent about his shareholding in the company set up by his father.

Mr Sarwar said he plays no active role in the business and voluntarily waived his right to any dividend after becoming an MSP.

Although senior politicians have previously placed shares in a blind trust that can be accessed at a later point, Mr Sarwar will go even further and has signed a discretionary trust deed that means he can never access the assets.

The beneficiaries of the trust will be his three young children, who will not access the assets until they are adults.

Mr Sarwar, who has never had a second job while serving as a parliamentarian, has also said he will be backing proposals for a ban on second jobs for MSPs – and will introduce such a ban in government if a current Labour Member’s Bill fails.

Mr Sarwar said: “This contest is about our party’s future and our country’s future.

“I will always put the Labour Party and my country first. I am in the Labour Party because of my values, and members deserve to hear the radical policy ideas I am putting forward for the next Scottish Labour government.

“I will never apologise for being my father’s son. I am incredibly proud of his achievements, building a company from scratch than now employs around 250 workers – many in Nicola Sturgeon’s own constituency.

“Scotland has cradled my family, nurtured it and gave it opportunity and success.

“And it’s the Labour Party that allowed them to share that success to help others. I’m in the Labour Party because of those values and because I know our party remains the single best vehicle for change in this country.

“That’s why I have dedicated my life to fighting for the values I believe in. “