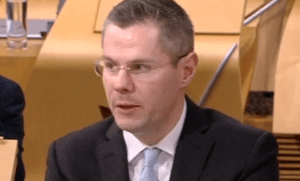 Finance Secretary Derek Mackay will deliver his Budget on 14 December, which will follow the Chancellor’s statement which takes place on 22 November.

Mr Mackay said that publishing the draft Scottish Budget prior to the UK Budget would be counter-productive “due to the levels of economic and fiscal uncertainty.”

The Budget Bill timetable has been amended to provide additional time for Parliament to scrutinise the proposals, which Mr Mackay says demonstrates good governance and partnership working.

The main focus of Mr Mackay’s statement will be on his plans for income tax, given the vote in parliament this week when the SNP abstained on a Labour motion calling on the government to use its powers by raising taxes.

It is thought most likely that the Scottish government will introduce a new rate of tax pitched at about 30p to aid the transition from the basic rate to the top rate.

Stephen Hay, a tax expert at RSM says a 30p band could raise about £450m and would bring in almost as much as a 1p rise in the basic rate without the poorest having to pay.