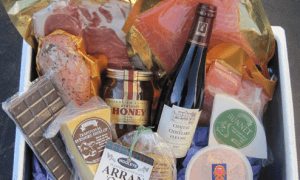 Scottish food and drink firms are switching their export targets to non-EU markets in an attempt to minimise the impact of potential post-Brexit barriers to trade.

A new survey shows western Europe remains a main target, but South America in particular is a major new source of customers for 57% of Scots firms, against just 32% last year  followed by the Middle East, which is up from 31% to 44%.

Employment continues to be the major concern as firms worry about rising costs and greater difficulties with hiring workers from the EU, according to the Bank of Scotland poll.

Rising labour costs were flagged by two-fifths of firms (44%) as the biggest challenge to the industry in the next five years, which has leapt from 28% last year to become the sector’s primary challenge.

The number of firms citing a lack of skilled labour as a challenge also grew year-on-year from a 25% to 33%.

Despite these challenges, 54% of all companies still plan to create jobs over the next five years, against 36% last year.

The sector is forecasting 18,000 additional jobs, up from the 14,300 predicted this time last year.

The number of companies investing in staff training grew from 31% in 2016 to 45% this year.

“The sector enjoyed a record year for exports last year and, buoyed by the depressed pound, many are now planning to grow not just in Europe but across a number of overseas markets.”

The survey comes as business leaders are being asked to sign a letter expressing support for Brexit.

However, some leaders said they are reluctant to support a strategy that lacks clarity.

It also follows a leaked report detailing plans for a clamp down on UK companies’ ability to recruit workers from the EU and another report warns of a brain drain from Scotland.

> A number of Scottish food and drink firms are hoping to raise funds for expansion following a meeting this week with a range of investors in London.

The gathering at Scotland House was organised by the Scottish Business Network.

Among the potential investors was Inverleith, an Edinburgh-based specialist food and drink private equity investor.

Adam Hardie, Head of Food and Drink at Johnston Carmichael, who also attended, said: “We are delighted to have attracted some of the most promising new brands from Scotland’s vibrant food industries and to have introduced them to a range of specialist investors who have experience in precisely this sector.

“We are confident that real progress has been made in attracting the investment needed to move these brands to the next level.”

Linkedin
Scottish food and drink News, Scotland No Comments » Print this News
CBI out of tune and out of ideas Previous News
Next News Evans becomes first salmon ambassador