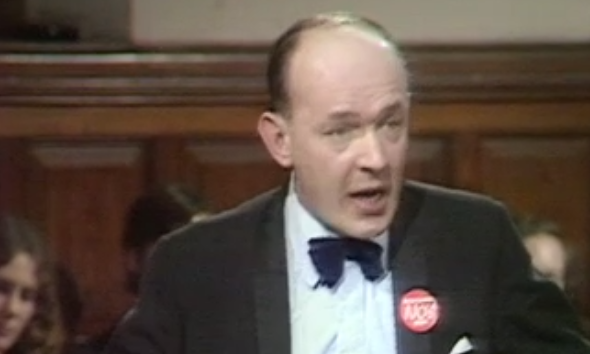 Teddy Taylor addressing the Oxford Union on devolution in 1979

The 80-year-old represented Glasgow Cathcart for the Conservatives and was first elected in 1964.

Ms Davidson said: “Teddy Taylor was one of the great servants of our party in Scotland.

“He built up a huge personal following in his Cathcart seat in the 60s and 70s as the original ‘tenement Tory’.

“Even now, 40 years on, many local people will remember his fierce commitment and dedication to Glasgow.

“Teddy continued that service in Southend for many years where he was held in the same esteem as he was regarded in his home city.

“He was my mum’s MP when she was growing up in the south side of Glasgow. Lots of folk in Glasgow would declare – ‘I’m no voting Tory, but I am voting for Teddy Taylor.’

“He was a true parliamentarian and a great local champion who will be remembered with fondness across the political spectrum.

“We send our deepest condolences to his family and wish them all our support at this time.”

Sir Edward MacMillan Taylor was a British Conservative Party politician who was a member of parliament from 1964 to 1979 for Glasgow Cathcart and from 1980 to 2005 for Rochford and Southend East.