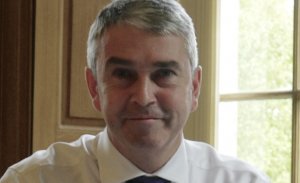 Housebuilder and construction company Cruden Group has reported record turnover and profit and said it is optimistic about the years ahead.

The 12 months to the end of March marked the 18th consecutive year of profitability which group managing director Kevin Reid (pictured) described as a “wonderful achievement”.

Construction turnover grew 18% from £136m to £160m and key activity remained the construction and refurbishment of residential housing for clients in the public sector.

The group – which has about 50 active sites across Scotland at any given time – continues to focus on innovation, energy efficiency, regeneration and affordability.

Mr Reid said 2017 has been a “fantastic year” for Cruden. The company won the Queen’s Award for Enterprise as part of the City Legacy consortium

“To have had eighteen consecutive years of profitable trading is a wonderful achievement, especially against the challenging economic backdrop we’ve had in recent years,” he said.

“The group board is delighted with the strong performance of the business, and we look towards our 75th anniversary next year with optimism. We fully expect our business to continue to grow sustainably in the years ahead.”

He said the continued availability of Help to Buy (Scotland) has also been beneficial to first time purchasers.

“Training and skills development is a key focus within the Group, so it is also fantastic news that we have continued to retain in excess of 50 apprentices on our books – this will provide a pipeline of skilled and talented employees for the future.

“As a company with CSR [corporate social responsibility] firmly at its heart, I’m also proud that one of the group’s shareholders, Cruden Foundation, has now donated £6m to community based charities in Scotland,” said Mr Reid.