BrewDog to raise £90m as it heads down under 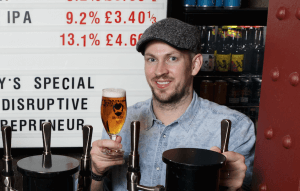 BrewDog is planning another crowdfunding campaign to expansion and is targeting a value of £5 billion.

The Aberdeenshire-based brewer and pubs group hopes that a fifth “equity for punks” scheme raise will help bring in £90 million to fund its ongoing expansion.

Founder James Watt (pictured) said: “Our plan is to try to turn BrewDog into a £5bn company in five years.”

He said that the brewery’s international expansion plans needed £180m to push forward. Half of this amount will be raised from its private equity backer TSG Partners.

It hopes the extra funding will be raised through a mix of bank financing and crowd investment.

BrewDog has previously raised record-breaking amounts through its crowd equity campaigns, but its last round fell short of its £25m target at £19m.

The company has now expanded to the US and is searching for a site in Australia, thought to be Adelaide.

The Adelaide Hills region is blessed with a number of brewers of fine craft beers.

It is also planning to open breweries in China.