Housing company, Wheatley Group, has secured £65 million in bank support and is looking to raise further finance to fund an ambitious house-building programme.

The latest funding, in the form of a five-year revolving credit facility with Bank of Scotland and Royal Bank of Scotland, takes the amount raised by Wheatley in the past three years to more than £500 million.

It is helping to fund the country’s largest programme of building affordable homes.

“It is our intention to return to the capital markets in the next couple of years and to develop other means of securing additional private finance to continue funding our ambitious house-building programme across Scotland, from West Dunbartonshire through Glasgow to Edinburgh and the Lothians.”

The company has delivered 105 flats and terraced houses through partner organisation, GHA, and its commercial subsidiary, Lowther Homes, on the site of the former Govan tram depot.

The development is part of Wheatley’s rolling programme of 3,500 new affordable homes and is a direct result of a fundraising drive that included £300 million of bond finance from the London capital markets in 2014.

A further £100m came from the world’s largest fund manager Blackrock in May this year and  £50m in 2015 to develop Lowther Homes’ portfolio, also from Royal Bank of Scotland and Bank of Scotland. 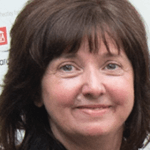 GHA chairman Bernadette Hewitt (right) said the Govan development is “an excellent example of how GHA, Lowther and Wheatley are playing their parts in Glasgow and across Scotland to address the acute need for new energy-efficient, affordable homes.”

The historic Govan site, which takes in Brand Street, Harvie Street and Clutha Street, comprises 85 homes for social rent by GHA and 20 mid-market flats in the refurbished former red sandstone tram office which are let and managed by Lowther Homes.

The site, which had lain derelict for years, was a tram depot in the early 1900s. Rows of tram sheds behind the depot offices were later used as trolley bus garages before the site became a car pound for Strathclyde Police in the 1990s. The sheds were later demolished.

The homes were built for GHA by Cruden Building & Renewals and designed by Collective Architecture. The £11m development was part funded by a Scottish Government grant of £5.5m.