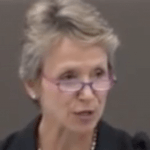 Dame Helen Alexander, the first female president of the CBI, has died aged 60.

She led the CBI through the tricky post-crash period between 2009 and 2011 and was held as a trailblazer for female business leaders.

Dame Helen began her career in publishing at Faber & Faber, before moving to the Economist Group in 1985, where she became managing director in 1993 before taking the helm in 1997.

Her career included boardroom roles at Centrica, Northern Foods and Rolls-Royce. She was also a non-executive director of PA Group, parent company of the Press Association, and at BT Group and Huawei UK.

The CBI’s current president Paul Drechsler said she was “a brilliant leader” who was “widely respected”.

The Economist Group, of which she was chief executive from 1997-2008, said business had “no better ambassador”.

Dame Helen, who was married with three children, had been battling cancer for several years.