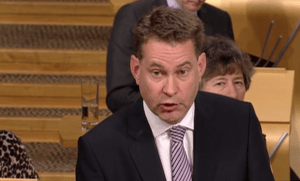 The Scottish Conservatives have accused the SNP of failing to admit the cost of separation and of ‘hiding’ behind the figures.

Conservative finance spokesman Murdo Fraser (pictured) said Ms Sturgeon has still to let the public know what the SNP proposed and how much independence would have cost.

The annual ‘GERS’ data on revenue and expenditure is published on Wednesday and the Scottish Conservatives have accused the SNP of “running for cover” by failing to be straight with the public.

At the weekend, the Fraser of Allander Institute declared that the SNP government should set out “the tough choices” that it would impose on Scotland under independence.

Mr Fraser said: “Last year, Nicola Sturgeon announced with great fanfare that her Growth Commission would set out how independence could be achieved. It has all gone strangely quiet.

“She’s had the findings on her desk since the turn of last year – where they’ve gathered dust ever since. What has the SNP got to hide?

“Rather than keeping the facts from the public, it is time the SNP was upfront and let people in on what it would propose.

“As the respected Fraser of Allander Institute has said this week, it is ‘crucial’ that the Scottish Government is upfront about its plan for separating Scotland from the UK.

“This week the evidence will show, once again, that Scotland benefits from being part of the UK.

“If the SNP continues to hide its own plans from public view, we can only conclude that the nationalists know this too.”