Sharp rise in demand from Asia 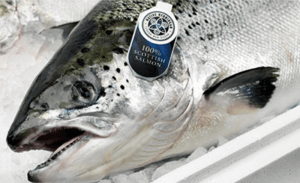 Scottish salmon producers have seen second quarter overseas sales rise by more than 70% on last year to a new record of £345 million.

More than 29,000 tonnes of salmon left Scotland in the three months to the end of June, delivering profit of £190m.

The US remains the biggest market for Scottish salmon, though sales to China were worth £44m, according to HMRC figures.

“The development of the Far East marketplace is a huge programme of work and the fact that annual Chinese exports are now worth around £90 million from a standing start six or seven years ago indicates that this has been worth the effort.

“East Asian markets are becoming increasingly significant, with Taiwan and Vietnam in the top ten importers.

“We continue to see the huge global opportunity for high quality Scottish food and for salmon, in particular. Quality and provenance are highly prized in all markets and Scottish salmon fits the bill. Its traceability from source to plate is another respected attribute in the Far East.”