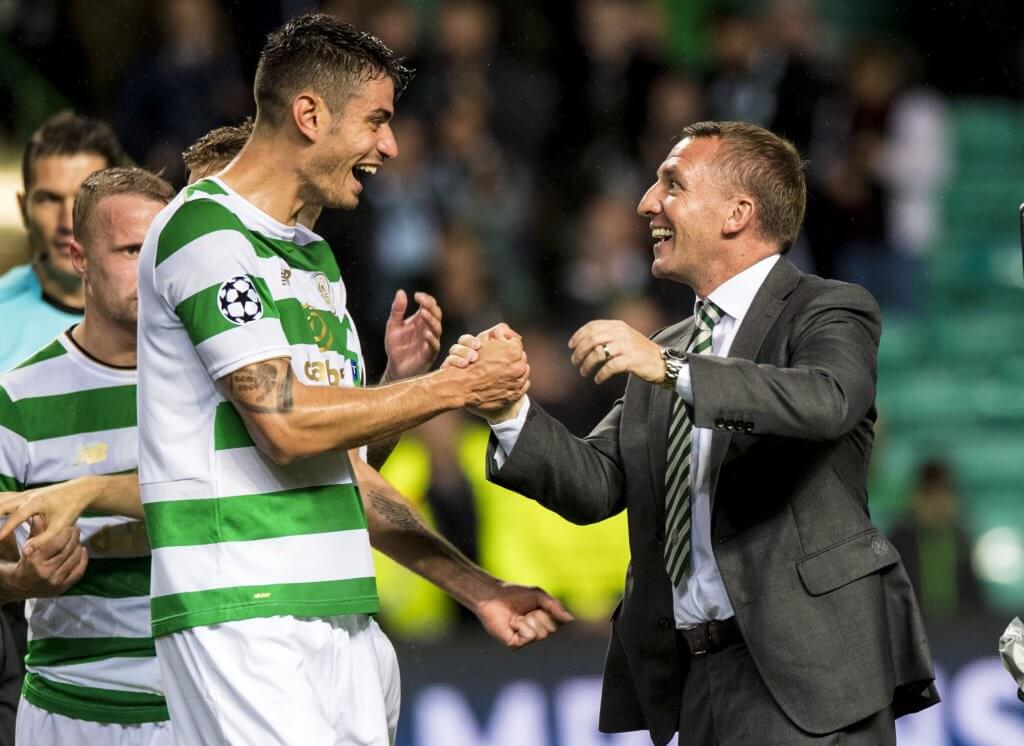 The Hoops are set to compete in the money-spinning group stages of the competition for the second year running after dismantling the Kazakhstan side in Glasgow.

While Rodgers refused to concede publicly it was mission accomplished, Celtic will make the long journey for the return leg on Tuesday comfortable in the knowledge that the tie is effectively over as a contest.

“Once we scored the first goal, we really settled down and as the game went on we played our shape very well and were very composed,” said the Northern Irishman.

“We ended up winning with a great scoreline. It was an outstanding team performance and shows the measure of how the players have progressed and developed since last year.”

The teams met in the third qualifying round of the tournament last season, with Celtic narrowly edging through on aggregate but it was a different story on this occasion as the home side ran riot.

“Last year it was a very tough game for us but we showed composure and maturity to go and finish the job and maybe we could have scored one or two more goals,” added Rodgers.

“The players got the rewards for a mature performance. It was very pleasing scoreline and performance.”

Australian Tom Rogic carved out the first goal of the match when he drove into the box and dinked a ball towards the back post which Evgeni Postnikov knocked into his own net.

Scott Sinclair made it 2-0 as the interval approached before netting No. 3 shortly after half-time.

Celtic went in search of more goals and James Forrest slotted home the fourth before Leigh Griffiths’ shot deflected in off Igor Shitov for No. 5.

“We fly out to there after an important league game this weekend and will look to finish the job,” said Rodgers.

“You couldn’t ask for any more. We were playing in a high pressure game, the final qualification phase with the first leg at home and to win 5-0 and have the evening we had was perfect, really.”

Leigh Griffiths was restored to the starting line-up and tormented the visitors’ defence, the Scotland international insisting Celtic will not get ahead of themselves as they prepare for the formality of the second leg.

“We will not be taking anything for granted,” said the striker. “We have a big league game against Kilmarnock this weekend and then we’ll focus on the return leg.”

After coming through the qualifiers last season, Celtic were grouped with Barcelona, Manchester City and Borussia Monchengladbach, finishing bottom of the table with three points from six games.

Should they complete the task next week, Rodgers and his men will be hoping for a more favourable draw this time around.