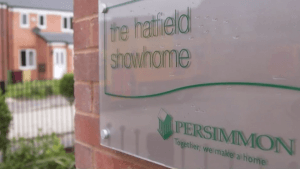 Sub-prime lender Provident Financial plunged by 43.55% to 990.50p after it issued its second profit warning since June and announced that its chief executive Peter Crook is leaving the company.

The FTSE 100 was up by about 50 points in early trade, buoyed by strong half-year figures from house builder Persimmon which led the risers, up 2.09% at £26.30.

Chief executive Jeff Fairburn was upbeat for the rest of the year. “Whilst we remain vigilant to changes in market conditions we also recognise we are in a strong position to take advantage of opportunities that arise,” he said.

Shares in mining giant BHP Billiton are also trading higher, up 2.45% at £13.99 after reporting a return to profit for the full-year and said it will sell its US shale oil assets following pressure from investor Elliott Advisors.

Sports Direct has increased its stake in Debenhams from 16% to 21%. The leisurewear group, is majority owned by Mike Ashley.

The company admitted on Monday that it was interested in making an approach to Fiat Chrysler Automobiles, in particular its Jeep brand.