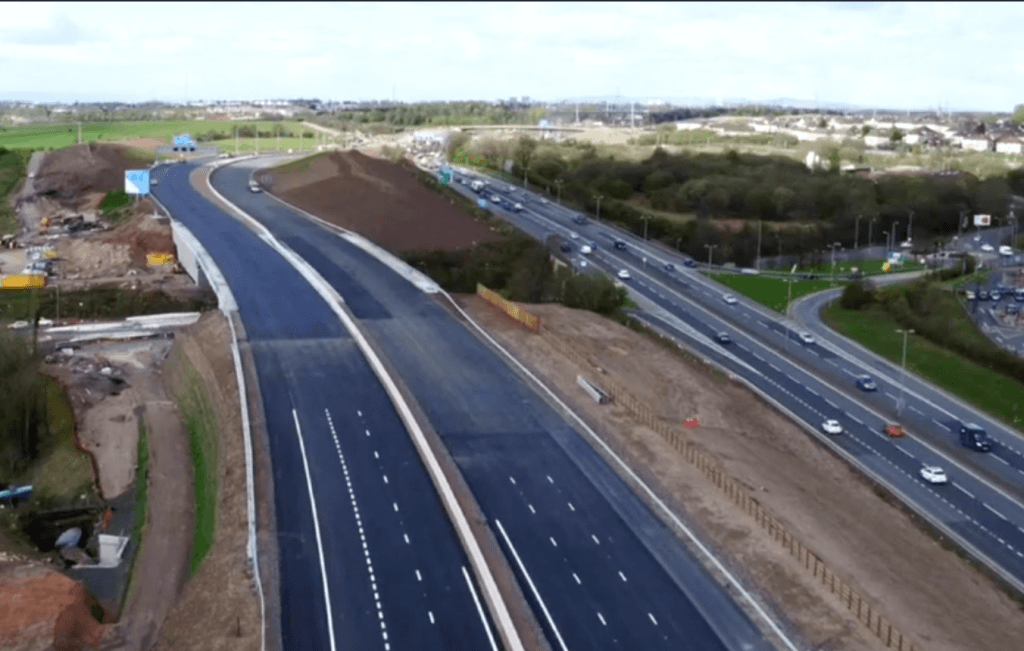 A £500 million investment in motorway improvements has been opened and is expected to save motorists up to 20 minutes on journey times.

The M8 M73 M74 Motorway Improvements Project, includes a new seven mile stretch of the M8 and is the first part of a combined £1.7 billion investment by Transport Scotland in the roads network.

New analysis by Transport Scotland shows journey times are significantly improved, with vehicles now travelling along the M8 at an average speed of almost 70mph, even during the busiest periods.

The journey time savings are expected to add more than £1bn to Scotland’s economy by improving the connections for businesses between Edinburgh and Glasgow and beyond.

Improved road safety through the reduction of traffic on local roads, is set to result in a predicted reduction of more than 100 accidents per year, and accident savings of more than £118m over a 30 year period.

Speaking at the Maxim Business Park at Eurocentral, the First Minister said: “This new length of motorway has completed the M8 link between Glasgow and Edinburgh and Scotland’s previously most congested junction.

“The M8 is a vital link in the central belt and this newly completed section will help connect people to business, leisure and education opportunities and also creates a better environment for companies to do business.

“Businesses are already reporting a journey time saving of up to 20 minutes travel between Scotland’s biggest cities and a similar saving for those using Raith junction. These improvements and additional road capacity will ensure our economy has room to grow.

“With the completion of this project, and three others others  – the Queensferry crossing, the first section of the A9 dualling and the Aberdeen bypass – by next spring, more than 250km of new roads will have been completed in the last 10 years – representing a total investment in construction of £2.81 billion.”

During construction, the project provided training and employment to more than 8,000 workers, who contributed more than 6.5m hours of work to deliver these improvements.

It also project provided a minimum of 30 graduate and apprenticeship positions during the three year construction period, with a further 20 construction jobs each year aimed at the long-term unemployed. The project is also expected to provide sustainable long-term employment opportunities for approximately 60 full-time staff during the operation and maintenance of these routes over a 30 year period.

Background
Work on the project began in February 2014 and all roads on the M8 M73 M74 Motorway Improvements Project were opened to traffic in Spring 2017 as planned.

Further infrastructure projects set to complete include the Queensferry Crossing, AWPR & Balmedie to Tipperty and A9 Dualling Kincraig to Dalraddy.

This project marks the start of a year of infrastructure delivery across Scotland.  By spring 2018, the total length of new and upgraded roads delivered in Scotland over a twelve month period will be 175km, including more than 61km of motorway and 75km of dual-carriageway. In addition, more than 54km of cycle routes and footpaths will have been completed.

Scotland was slower out of lockdown (pic: Terry Murden) A two-speed economic recovery is emergingRead More

John Swinney: ‘I have heard the anger’ Scotland’s Education Secretary John Swinney is to announceRead More