May accused of backtracking on board reforms 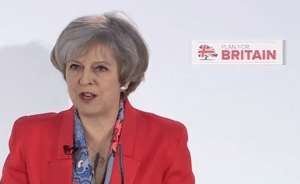 Prime Minister Theresa May has been accused of backtracking on plans to tackle boardroom excess.

Reforms aimed at controlling sky-rocketing pay and reckless behaviour by big companies were unveiled by the government.

But they were criticised for not including a pledge to include employees on boards.

The UK’s biggest firms will have to reveal how much more their chief executives are paid compared with the average worker.

But they will only have to show they have listened to their workers.

The new corporate governance laws, which are due to come into effect by June 2018, will force some 900 publicly listed companies to reveal the pay ratio between bosses and workers.

The Prime Minister was criticised by Labour and trade unions for “reneging” on her pledge for worker representation on company boards.

In October, Theresa May told the Conservative Party the Government would “publish our plans to have not just consumers represented on company boards, but workers as well”.

Tim Roache, GMB General Secretary said: “This is a pathetic climbdown from the Government. The Tories have once again sided with the fat cats over the workers.

“The Prime Minister’s original announcement was meant to make the Conservatives look friendly to working people – but she has completely failed even to follow through on the modest promise she made, watering it down so much that it is meaningless.

“Worker representation on boards would have helped get greater fairness and dignity in the workplaces.

“People won’t fall for the Prime Minister’s nice words when they are followed by broken promises like this.”

Investor groups UKSA and ShareSoc were underwhelmed by the announcment.

In a joint statement they said: “The publication confirms that the proposals fall well short of those originally floated by the Prime Minister, Mrs May last year.

“While Mrs May still talks about excessive pay as ‘the unacceptable face of capitalism’ the measures that are, apparently, supposed to help control future excesses have all the clinical credibility of a sticking plaster over a gaping wound.

“There will be no changes to the current voting regime on executive pay. The vote by shareholders at the AGM on the current year’s pay package for senior executives will remain ‘advisory’.

“Instead of taking firm action to strengthen shareholders’ say on executive pay the government plans to implement a system whereby The Investment Association will be charged with keeping a register of companies at which there has been a protest over executive pay by shareholders owning at least twenty percent of the stock. This move is bizarre.

“The proxy voting agency, Manifest, already keeps such a register. Furthermore, The Investment Association is the industry body which represents fund managers and asset managers.

“These are the very organisations which have recently been heavily criticised in a damning report by the Financial Conduct Authority”.

The joint statement added: “Another measure which the government is to introduce to help control excessive boardroom pay are the proposals on S172 and the need to report back to shareholders on how the board has managed the conflicting preferences of different stakeholders.

“This is positive and welcomed. The process of soft implementation via the FRC code may work, although ShareSoc remains concerned that the big offenders will merely nod at the code and simply ignore this. There is a greater risk of non-compliance in AIM and small cap companies, but even some notable large caps ignore corporate governance norms with impunity (Sports Direct, Glencore and potentially Saudi Aramco).

“If Government truly wants change, then it should empower individual shareholders to drive change from the bottom up, as one of the few parties having a direct ownership interest in UK plc. The rights of individual shareholder need to be strengthened and restored, starting with putting beneficial shareholders’ names on the shareholder register in addition to the nominee account name. This is a pre-requisite for any serious attempt to reform corporate governance and executive pay in the UK.”

Mark Northway, chairman of ShareSoc commented: “It is sad that 2 years of consultation have produced such unambitious proposals. Pay ratios and a register of offenders maintained by the cunning foxes who run the show. Private shareholders are ignored again, their voting rights assigned to unaccountable intermediaries.”