MacDonald to push Brewgooder across UK 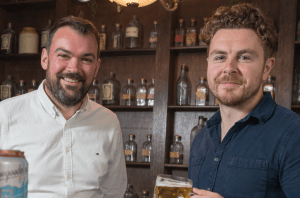 Brewgooder has appointed Scott MacDonald as commercial director as it sets its sights on increased UK distribution.

Mr MacDonald joins the team with the task of increasing presence in the UK retail channel and developing an improved draught offering to the on-trade.

Bringing more than 20 years’ experience in the food and drink industry, he worked both in-house and as a consultant for companies including AB Inbev and Eden Mill.

Currently Brewgooder is stocked in ASDA UK wide and has a nationwide on-trade distribution deal with Matthew Clarke, securing access to thousands of bars and restaurants.

Mr MacDonald said: “Now is the time to scale up. We’re focussed on securing further listings across multiple retail as well as national on-trade and casual dining groups with the aim of increasing distribution and brand awareness across the UK.”

London is a key focus for Brewgooder and the brand is currently recruiting for a Business Development Manager to help secure influential listings in the capital.

Mr Macdonald said: “The craft beer market continues to grow in London giving us a huge opportunity and we are growing our London presence to make sure Brewgooder is present in the right places and reaching the right people.”

Scotland continues to be an important location for Brewgooder with more than 150 on and off trade outlets now serving the beer.

Alan Mahon, co-founder, said: “This is a milestone moment for Brewgooder as it shows the commitment we have to growing the brand and ultimately reaching our goal of providing one million people with clean drinking water. Having Scott’s expertise, drive and contacts will allow us to take Brewgooder to the next level and focus on new ideas which will see our ambitious mission become a reality.”

Brewgooder is brewed in partnership with BrewDog at its Ellon brewery, at zero margin. All profits are donated to the Brewgooder Foundation whose trustees are made up of founders Alan Mahon, Josh Littlejohn, and BrewDog founders James Watt and Martin Dickie.