Newspaper up for sale 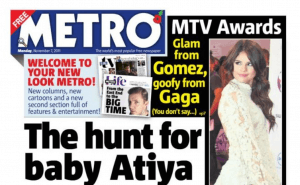 The publisher of the Daily Mail is said to be working on a £35 million sale of the Metro free newspaper.

Daily Mail & General Trust has appointed advisers to find a buyer for the title which was launched in 1999 and is now one of Britain’s best-read papers with a million readers a day.

The group’s new chief executive Paul Zwillenberg is believed to keen on streamlining the group and has already sold a number of assets including an online video sharing business and a stake in Euromoney.

Potential buyers are likely to include the big regional groups, although Johnston Press – owner of The Scotsman – is already heavily indebted an Trinity Mirror has stepped up its cost-cutting programme.

The Metro has evolved into a more brash, celebrity-led paper read mainly by commuters. Hence, it has adopted a short news bite style and uses lots of photos.