Sturgeon criticised over rise in advisers 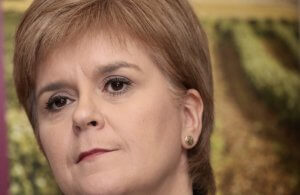 Nicola Sturgeon has come under fire for the level of taxpayers’ money the Scottish government is spending on special advisers.

The addition of Callum McCaig, who lost his Westminster seat in June, means the number of so-called SPADs has risen to 14 – matching the previous record high under the SNP. In 2012 it had nine.

Ms Sturgeon has previously criticised the Westminster government’s hiring of SPADs as an “abomination”.

The increase comes despite the SNP previously saying it would cut down on SPADs, said Conservative finance spokesman Murdo Fraser.

“Over the years the SNP has repeatedly said it wants to reduce the number of special advisers working for government. Yet this latest appointment returns numbers to the previous record level,” he said.

“For some reason, when the UK Government appoints former politicians it is an ‘absolute abomination’, according to Nicola Sturgeon. Yet in recent times, she has appointed two former SNP politicians to the public payroll.

“The SNP clearly thinks it can use taxpayers’ cash in this way without any recourse from voters at all.

“But people are increasingly seeing through the SNP’s hypocritical ways.”

A Spokesman for the First Minister said: “This is ludicrous hypocrisy from the Tories given recent revelations that spending by the Tory Scotland Office on spin doctors has increased six-fold since they took power.

“While the Scotland Office exists simply to act as apologists for whatever the Tory government inflicts on Scotland, the Scottish Government is absolutely focused on delivering for the people of Scotland, including in the increased areas of devolved responsibility – as well as tackling the serious economic challenges posed by the Tories’ extreme Brexit.”