Amid promise of price cuts..

Ryanair warns it may cut flights over EU deal 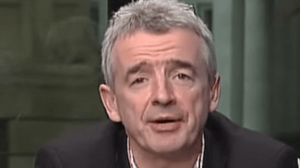 Ryanair says it will cut fares despite a competitive pricing environment but has warned about cancelling and relocating flights because of the UK’s withdrawal from the EU.

“We remain concerned at the uncertainty which surrounds the terms of the UK’s departure from the EU in March 2019,” it said in a first quarter statement.

“While we continue to campaign for the UK to remain in the EU Open Skies agreement, we caution that should the UK leave, there may not be sufficient time, or goodwill on both sides, to negotiate a timely replacement bilateral which could result in a disruption of flights between the UK and Europe for a period of time from April ’19 onwards.

“We, like all airlines, seek clarity on this issue before we publish our summer 2019 schedule in the second quarter of 2018.  If we do not have certainty about the legal basis for the operation of flights between the UK and the EU by autumn 2018, we may be forced to cancel flights and move some, or all, of our UK based aircraft to Continental Europe from April ’19 onwards.

“We have contingency plans in place and will, as always, adapt to changed circumstances in the best interests of our customers and shareholders.”

The company said pre-tax profit rose 55% to €397m (£356m) in the three months to 30 June but admitted the figures were “distorted” by a good Easter. There was no holiday in the corresponding period last year.

Chief executive Michael O’Leary said: “We are pleased to report this 55% increase in PAT to €397m but caution that the outcome is distorted by the absence of Easter in the prior year Q1.

“While Q1 average fares rose by 1% to just over €40, this was due to a strong April (boosted by Easter) offset by adverse sterling, lower bag revenue as more customers switch to our two free carry-on bag policy, and yield stimulation following a series of security events in Manchester and London.”

“We expect the pricing environment to remain very competitive” in the six months to end-March.