Women are starting businesses at a far faster rate than men, according to revealing new research.

There are also big differences in the start-up rate in various parts of the country with Scotland ranking as the third highest region for ‘gender parity’.

While men are still twice as likely to be entrepreneurs as women (10.4% against 5.5%), the data shows that over the last decade there has been a surge in the number of women starting their own enterprise, thereby narrowing the gap.

The research from the University of Strathclyde and Aston University has been drawn from data produced by the Global Entrepreneurship Monitor (GEM).

Scotland now ranks as the third highest region in the UK in terms of gender parity for entrepreneurship, with 64 early-stage female entrepreneurs for every 100 males.

There has been a noticeable rise in high profile female entrepreneurs in Scotland, such as Rebecca Pick – who launches her personal security alarm to the market today – Leah Hutcheon of booking service Appointedd and Alex Feechan, who designed her own range of leisure clothing.

Ms Pick, 23, set up her business while at university and has raised almost £1 million from a variety of investors. Earlier this year she secured a place with fellow businesswomen Heather McDonald of Wooha Brewing and Polly Van Alstyne of Scottish Biotechnology on a trip to meet investors in California. The Scottish government subsequently announced that funding to support women-led businesses would be doubled to £120,000.

Ms Hutcheon has also raised substantial funds from private investors to take her business global. Ms Feechan, who has designed a range of cycling and outdoor wear, secured a deal with an online distributor, raised more than £200,000 and has recently opened her first retail outlet in the Borders.

The region with the closest gender parity is the West Midlands, where there are 74 new female entrepreneurs for every 100 males, compared to just 33 in the North West.

Researchers have suggested these regional differences may be partly explained by the presence of higher numbers of graduates and mobile individuals including international migrants.

Across both sexes, the 2016 UK early-stage entrepreneurship rate was significantly higher than 2015, and again exceeded the previous long-run rate of around 6% which prevailed until 2010. 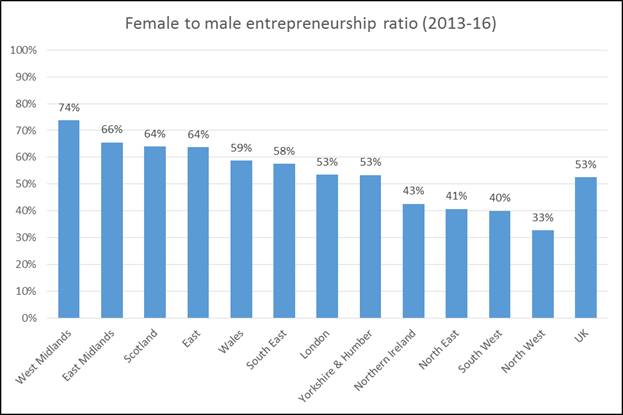 At the global level, the UK’s rates of female early-stage entrepreneurship remain well below many other advanced economies.

Canada has the highest absolute rate of female early-stage entrepreneurs at 11.6%, while Spain has the closest male/female ratio of any developed economy, with 74 Spanish women entrepreneurs for every 100 men, compared to 53 for the UK.

Many developing economies display even higher rates of female entrepreneurship. In Ecuador, 31.9% of women are entrepreneurs, while other Latin American and South East Asian nations dominate the top spots. Indonesia and Brazil are the only GEM-participant countries where there are more female entrepreneurs than male.

The findings have been revealed in the Global Entrepreneurship Monitor (GEM) UK Report, an annual publication from the GEM UK team which looks at a range of entrepreneurship indicators, coordinated by Professor Mark Hart of Aston Business School in Birmingham and Professor Jonathan Levie of the University of Strathclyde Business School.

GEM is the largest and most comprehensive study on entrepreneurship globally, collecting data on entrepreneurial activity in more than 60 countries via centrally-coordinated questionnaires.

It defines entrepreneurship as any attempt at new business or new venture creation, such as self-employment, a new business organisation, or the expansion of an existing business by an individual or team.

Professor Jonathan Levie of the Hunter Centre for Entrepreneurship at Strathclyde Business School, said: “This rise in female early-stage entrepreneurship in Scotland to a level that matches the average across the UK confirms what people in Scotland’s entrepreneurial ecosystem have been seeing in recent years – the emergence of a new generation of women entrepreneurs.”

“On the one hand, we could point to different societal expectations, with women still taking on the bulk of unpaid caring roles and entrepreneurship still stereotyped as a ‘male’ career choice in our wider culture,” she said.

“When asked why they started their business women are significantly more likely to cite ‘greater flexibility for my personal and family life’ and the desire for ‘freedom to adapt my own approach to work’ than men.

“But despite these differences, and other factors like sector, age and start-up capital, both men and women display similar levels of ambition when it comes to growing their businesses.

“We also observe a tendency for women generally to be more risk-averse which may make them self-select out of entrepreneurship, particularly in places where there are ‘safer’ employment options that allow them to work more flexibly around caring responsibilities.

“This would help to explain why places like Northern Ireland and the North East of England, with relatively high proportions of public sector jobs, have low start-up rates for both men and women.”

Minister for Small Business, Consumers and Corporate Responsibility, Margot James said: “Supporting innovation and entrepreneurs is a central pillar of this Government’s Industrial Strategy, so it is great to see more women throughout the country engaging in entrepreneurship in Britain.

“The UK remains among the best places in Europe to start a business, but we must continue working to ensure that this positive trend continues.

“From reducing corporation tax rates to providing £3.4 billion in finance through the British Business Bank, we know small business support is key to building a strong and thriving economy.”