As golf week is launched...

Scottish tourism is enjoying the benefits of the low pound as new figures show a sharp rise in the number of overseas visitors.

North Americans spent almost twice as much as the previous year as the number of US and Canadian visitors leapt by a fifth (19%) to more than 590,000.

Hotels, restaurants and tourist destinations saw their income swell by 40% to £641 million in the 12 months to the end of March.

Across all international markets, there was a 3% increase in visits in the 12 months to the end of March 2017 with spending rising by 9%.

Tourism Secretary Fiona Hyslop hailed Scotland’s assets, though she did not credit the fall in the pound as a factor in the rise in visitors.

She said: “Our industry, which employs 217,000 people, continues to flourish acting as a magnet for tourists drawn to our world class attractions. It is great news for our economy.

“The rise in overseas tourists is encouraging. Visitors are spending generously when they visit Scotland, particularly those coming from North America.” 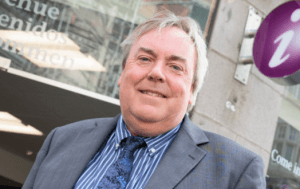 Malcolm Roughead (right), chief executive of VisitScotland, said: “These latest figures show that Scotland continues to punch above its weight in a hugely competitive global market, with our country seen around the world as a ‘must-visit’ destination.

“This was driven largely by a 19 per cent increase in trips and a 40 per cent rise in spend among those coming from North America, who are showing an ever-growing appetite for our history, culture and our stunning landscapes. Favourable exchange rates during this period also played a part.”

Supported by VisitScotland and Scottish Enterprise, Scottish Golf Tourism Week takes place 23-27 October and brings 70 of the world’s leading golf buyers to Scotland for a week of familiarisation trips and meetings with 80 golf tourism businesses.

Golf tourists are an important driver for Scotland’s visitor economy, with research showing that golfers from overseas will spend on average 4.5 times more per day than a regular tourist.

For every £1 spent on playing golf, £5 is spent elsewhere in Scotland’s economy, including accommodation, food & drink, retail and other tourism attractions.